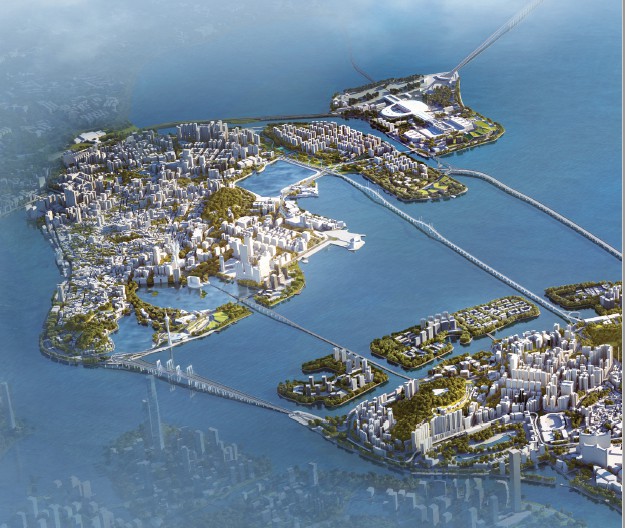 The current Urban Master Plan for the period of 2020-2040 still has scope for further improvement to make Macau more liveable, convenient and accessible for residents and tourists, according to industry experts speaking at a business event yesterday.
“To me, the biggest concern is that [the Master Plan] didn’t really analyze the existing problems of Macau,” Christine Choi Wan Sun, the president of the Board of Directors of the Architects Association of Macau and co-founder of JWCC Architecture, stated at a panel discussion titled “32.9sq kms: The Challenges Facing Macau’s Urban Master Plan.”
One of the shortcomings of the plan, according to the experts, is that it only considers Macau’s residents but not the daily floating population which includes tourists and cross-border workers, who have far exceeded the numbers of the local population.
The failure to address the floating population will add extra pressure to this “small and populated” city – especially on the beleaguered public transportation system.
Rui Leão, the president of the International Council of Portuguese Speaking Architects, echoed this idea, adding that, “In the long term, the floating population has an impact on overall transportation.”
Official data shows that Macau had a population density of 20,400 people per square kilometer in 2019, which catapulted it to the status of one of the world’s most populated regions.
The high population and influx of daily visitors have been putting strain on the city’s transportation system.
To thin out the heavy traffic, Manuel Wu, a member of the Macau SAR Heritage Committee, suggests that the government think outside the box and explore tapping into water resources to develop water transportation.
Wu cited the example of using water transportation to send people from the Inner Harbor in the Macau Peninsula to Coloane to help decrease road traffic.
Choi emphasized that it is crucial for the government to integrate all transportation links in the future so people can get around every part of the city with ease.
According to the Master Plan, the government is set to segment the entire city into 18 numbered zones, which is another shortcoming of the urban planning project in Choi’s view.
This method of segmentation makes “no reference to the previous history of Macau,” and will cause Macau’s cultural identity to lose its spirit, she expressed.
Considering limited amount of space in the city, Choi urged the government to “go beyond the traditional methods and explore different ideas” to create a more sustainable and accessible city.
“Sometimes we reclaim land, but that’s not the only solution. We should tap into water resources more, such as water transportation and floating architecture,” Choi added.
The Land, Public Works and Transport Bureau (DSSOPT) promulgated the draft of the Urban Master Plan in September 2020, followed by a period of public consultation from September to November that year.
The Master Plan outlined 13 strategic goals, including greater integration into the Greater Bay Area, the development of more commercial districts, greater use of public transportation, and molding Macau, with its total land area of 36.8 square kilometers, into a more habitable city for the projected population of 808,000 by 2040.
According to official information, a report detailing the results of the public consultation is in the pipeline and will be published soon.
The talk was hosted by the British Chamber of Commerce in Macao at MGM Cotai.