The U.S.-led coalition conducted a series of airstrikes targeting a gathering of Islamic State leaders near the northern Iraqi city of Mosul, a senior U.S. defense official said Saturday. The airstrikes on Friday night destroyed a convoy consisting of 10 Islamic state armed trucks, said the defense official, speaking on condition of anonymity to describe military operations. He confirmed that coalition aircraft conducted a series of airstrikes “against what was assessed to be a gathering of ISIL leaders near Mosul,” using another acronym for the Islamic State group. “We cannot confirm if ISIL leader Abu Bakr al-Baghdadi was among those present,” he said. “We have no further information to provide regarding these strikes.” The Islamic State group has proclaimed al-Baghdadi as caliph, or supreme leader, of the vast areas of territory in Iraq and Syria under its control and demanded that all Muslims pledge allegiance to him. Al-Baghdadi, an ambitious Iraqi militant believed to be in his early 40s, has a USD10 million U.S. bounty on his head. Since taking the reins of the group in 2010, he has transformed it from a local branch of al-Qaida into an independent transnational military force, positioning himself as perhaps the pre-eminent figure in the global jihadi community. 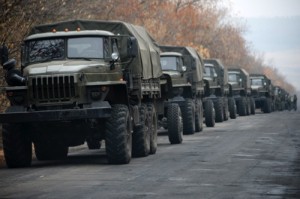 The heaviest shelling in recent weeks has shaken the main city in Ukraine’s rebel-held east, heightening worry about the renewal of full-scale conflict despite a cease-fire signed two months ago between Ukraine and Russia-backed separatists. Artillery explosions roared throughout the early hours of yesterday in Donetsk, quieting only after sunrise. A city council statement said four residential buildings were destroyed, but it didn’t give information on casualties. The cease-fire called on Sept. 5 has been violated almost daily. Some of the heaviest fighting focuses on Donetsk’s airport. On Saturday, Associated Press reporters saw scores of military vehicles moving near Donetsk and farther to the east. Many of the unmarked vehicles were towing artillery. Ukrainian officials say rebel forces have received new weaponry and manpower from Russia. Moscow denies such claims. 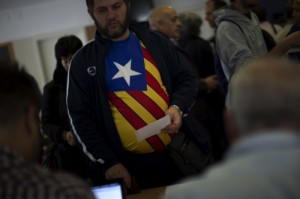 Spain’s northeastern region of Catalonia opened polling stations yesterday to hold an informal vote on independence that the central government has called illegal. The regional Catalan government pushed forward with the vote despite Spain’s Constitutional Court ordering its suspension on Tuesday after it agreed to hear the Spanish government’s challenge that the poll is unconstitutional. “Despite the enormous impediments, we have been able to get out the ballot boxes and vote,” regional president Artur Mas said after depositing his ballot at a school in Barcelona. Polling stations were being manned by more than 40,000 volunteers in an attempt to circumvent the court’s suspension. Results aren’t expected until this morning. The ballot asks voters two questions: should Catalonia be a state, and if so, should it be independent. Polls show that the majority of Catalonia’s 7.5 million inhabitants want to vote, while around half support independence.