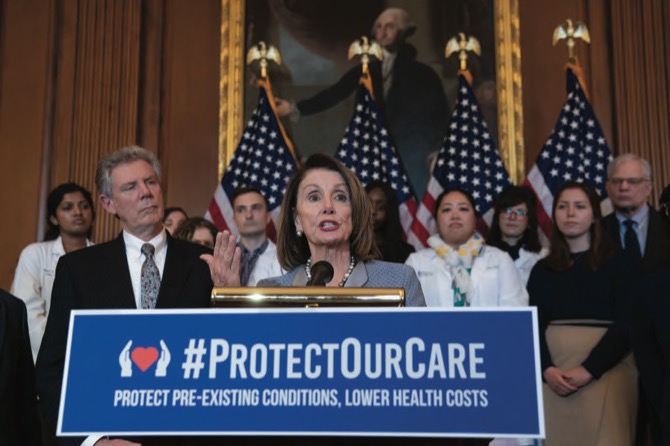 President Donald Trump is calling on Republicans to revive the effort to quash the Affordable Care Act, handing Democrats an opportunity to unite in defense of the law as they try to move past the Russia investigation and win the White House in 2020.

Trump’s administration is asking a federal appeals court to strike down the entire health care law. The president vowed on yesterday [local time] to make the GOP the “party of health care” and told Senate Republicans to lean into their own agenda on the issue as they head into next year’s election.

The moves could help Trump rally his conservative base as he celebrates Attorney General William Barr’s summary of special counsel Robert Mueller’s report that said there was no evidence that the president or his associates colluded with Russia in the 2016 campaign. But the push also poured political kerosene on an issue that many Democrats credit with powering their midterm election victories in November.

Top Democrats, including presidential candidates, said health care is an issue that resonates with voters more than the Mueller investigation.

“This is something that Americans care deeply about,” said Sen. Amy Klobuchar of Minnesota, a White House hopeful. “I may not have been asked about the Mueller report at town hall meetings, but I was sure asked about health care.”

Other Democrats appeared to relish the chance to shift to health care. Asked if the Trump administration’s court filing allowed Democrats to turn the page on Mueller, House Speaker Nancy Pelosi said she would have been talking about health care no matter what.

“We have been dealing with health care constantly,” the California Democrat said. “The public attention has been on the Mueller report, but we have been focused on health care.”

Another 2020 contender, Sen. Kirsten Gillibrand of New York, said if Trump “wants to have a fight on health care, it’s a fight we’re willing to have. And it’s a fight he is going to lose.”

That confidence is in part because health care was a big political winner for Democrats last year. According to AP VoteCast, a survey of more than 115,000 midterm voters nationwide, nearly 4 in 10 Democratic voters identified health care as the most important among a list of key issues including immigration, the economy and the environment. A Quinnipiac University poll released yesterday found 55 percent of Americans supporting the improvement and not the replacement of the nation’s health care system.

The Supreme Court has twice upheld President Barack Obama’s health care law, known as “Obamacare.” Five justices — a majority — who upheld the law in 2012 are still on the bench.

Trump’s effort to repeal Obamacare narrowly failed in the Senate in 2017. Nearly two years later, it’s unclear where the White House plans to focus its health care efforts. Trump’s most recent budget backs one piece of the legislation that stalled in the Senate.

Republicans gained Senate seats last fall, but there’s no indication that GOP senators want another fight over repealing Obamacare — particularly not those up for re-election next year. The GOP also lost control of the House, which means any attempt to dismantle the law could not pass Congress.

One White House official, speaking on condition of anonymity to address still-early talks, said discussions are ongoing with Pelosi’s office on legislation to lower prescription drug prices, but no substantive path forward for a broader health care bill has emerged.

As the debate plays out on Capitol Hill, the White House made a surprising legal argument for eliminating the health care bill. In a Monday court filing, the administration said the entire health care law should be struck down as unconstitutional after Congress repealed fines on people who remain uninsured.

That’s at odds with previous statements by leading congressional Republicans who said they didn’t intend to repeal other parts of the law when they cut out its fines, effective this year. It’s also a departure from the administration’s earlier stance in a lower court, where it had argued that only federal safeguards for people with pre-existing medical conditions and limits on premiums charged to older, sicker people should be struck down.

Repeal of Obamacare in its entirety would risk making more than 20 million people uninsured. That includes some 12 million low-income people covered through its Medicaid expansion and some 11 million purchasing subsidized private health insurance through HealthCare.gov and state-run insurance markets.

Some Republicans say that wouldn’t happen because the Trump administration’s “repeal and replace” plan would send grants to states for them to run their own health insurance programs. However, during the 2017 congressional debate over repealing the health law, the nonpartisan Congressional Budget Office estimated the GOP replacement plans would result in steep coverage losses.

Several GOP senators said that Trump told them to ensure those with pre-existing conditions stayed protected as they work on an Obamacare replacement. Republicans appeared ready to back up the president on health care for now.

Trump is “thinking that’s the issue that defines us as conservatives,” Sen. Mike Braun, R-Ind., told reporters after the president addressed a closed-door meeting of GOP senators.

“They were misled about collusion with Russia,” said Scalise, R-La. “The same people that have been misleading on all those other issues want to try to mislead people on health care costs.”

The sudden focus on the health care law comes as Democratic presidential candidates have embraced a move toward a single-payer health care system known as “Medicare for All.” The momentum for that effort could wane if congressional Democrats instead have to focus on defending Obamacare.

House Democrats on unveiled legislation to shore up the Affordable Care Act and expand enrollment to millions more people.

“For (Trump) to bring this back up is traumatic, and it shines a real light on what the contrast is going to be between him and whoever the Democratic nominee is,” said Andrew Bates, a spokesman for the Democratic group American Bridge. The group’s planned USD50 million investment in deterring swing-state voters from backing Trump in 2020 will focus in part on health care, as well as other economic issues, Bates said. Elana Schor & Ricardo Alonso-Zaldivar, Washington , AP