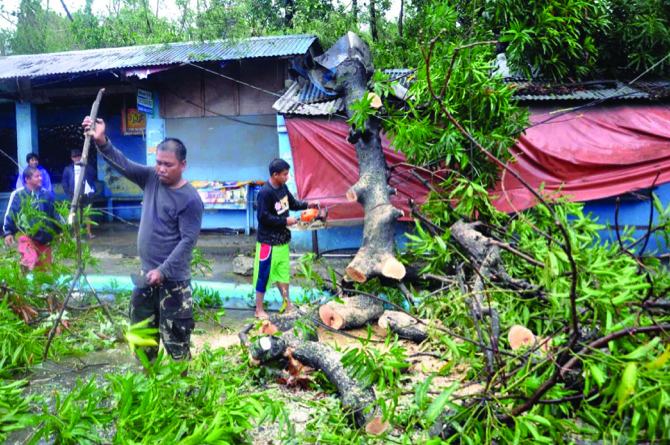 The Macau Meteorological and Weather Bureau (SMG) plans to issue a typhoon warning this morning in anticipation of Typhoon Yutu, which battered the northern Philippines yesterday. The SMG issued a statement noting that the storm’s category was downgraded from super typhoon to typhoon, since the winds lost some of their strength.

According to the SMG, the storm will move to the Northeast of the South China Sea. Officials in the Philippines said that Typhoon Yutu slammed into Dinapigue town in northeastern Isabela province before dawn yesterday, with sustained winds of 150 kilometers per hour and gusts of up to 210 kph.

A 5-year-old girl was killed and at least three other people missing, knocking out power in entire provinces and forcing thousands to flee from villages that were hit by a deadly storm last month. The typhoon knocked down trees and power posts and ripped roofs off houses and stores, officials said.

Government forecasters said Yutu slightly weakened after landfall. Yutu hit the Philippines after tearing through the U.S. Pacific territory of the Northern Mariana Islands, where it knocked out power, destroyed homes and delayed elections.

More than 10,000 villagers moved to safety in the Philippines’ northern provinces before Yutu hit.

“We didn’t even have to do forced evacuations. The people are still scared. They readily moved from the mountainsides and away from the river after our police declared it was time to evacuate,” said Mayor Victorio Palangdan of Itogon, a gold-mining mountain town, where more than 90 villagers died largely due to landslides set off by Mangkhut.

More than 1,000 villagers moved to emergency shelters in Itogon in Benguet province, which was expected to be hit by Yutu later, Palangdan told The Associated Press by telephone.

Mangkhut left more than 100 people dead and missing, mostly in Itogon and nearby mountain towns, and caused considerable damage to vegetable, corn and rice farms, because the typhoon struck during the harvest season. MDT/Xinhua