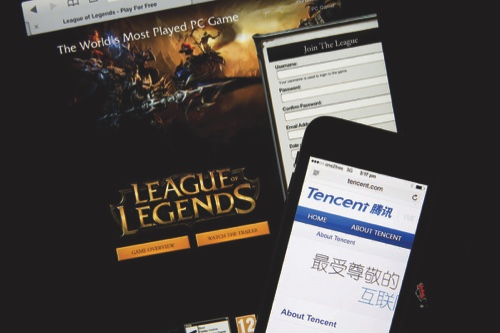 Tencent Holdings Ltd. is finding that the first 468 million users for its WeChat messaging service were the easiest.
The messaging application, which took China by storm, posted its slowest active user growth on record as it struggles to attract new customers in Western countries. Shenzhen-based Tencent is cutting back on marketing and sales spending to focus overseas expansion on more “hospitable” markets, Chief Strategy Officer James Mitchell said without offering specifics.
WeChat’s spectacular growth since its 2011 release has come from Greater China, where its main competition is fellow Tencent messaging service QQ, a holdover from the desktop computer era. Nearing saturation at home, WeChat’s push for overseas growth faces competition from Facebook Inc.’s WhatsApp.
“In countries like the U.S., users are already comfortable with using Facebook for social media and WhatsApp for messaging,” said Wang Xiaofeng, an analyst at Forrester Research Inc. in Beijing. “It would be hard for them to adapt to a new product.”
Monthly users of WeChat, known as Weixin in China, rose 6.8 percent in the quarter ending in September from the previous three months. That is the slowest pace ever and less than half the 15 percent pace of a year earlier.
Tencent posted profit Wednesday that missed analyst estimates. The company’s total revenue rose at its slowest pace since 2007 as development and staff costs increased.
The popularity of instant-message apps on mobile devices, replacing the more expensive text-messaging services, has helped fuel deals and rising valuations.
Facebook paid USD22 billion for WhatsApp, which has more than 600 million users, according to its founder. That deal was announced in February, about a week after Rakuten Inc. paid $900 million for messaging app Viber. Naver Corp.’s Line, the most popular messaging app in Japan, has been valued at $15 billion.
Growth in messaging has helped underpin Tencent’s own market value of more than $150 billion, with its Hong Kong-traded shares rising more than 30 percent for the year.
WeChat may be worth as much as $64 billion given the potential for the service to be monetized, Elinor Leung, an analyst at CLSA Ltd., said in a March report.
Tencent’s billionaire chairman, Ma Huateng, has been using WeChat as a stepping stone for the company’s ambitions to go overseas and reduce its reliance on China, which generates more than 90 percent of sales.
Even China President Xi Jinping encouraged the initiative during his visit to Tencent’s headquarters in 2012.
WeChat added 113 million active users since December, while WhatsApp added about 200 million. WhatsApp has added almost twice as many users this year compared with WeChat.
Tencent would stand a better chance of expansion if it chose to look in emerging markets, including southeast Asian countries and Latin America, said Forrester’s Wang.
The company hired Argentina’s soccer superstar Lionel Messi in 2013 to promote WeChat, and it has been running advertisements in Africa and Brazil across various platforms, including Facebook.
In Singapore, WeChat partnered with local cab booking app Easy Taxi to attract more users in June, allowing customers to place orders directly.
“There were certain markets proving hospitable to our international expansion, particularly via our WeChat application,” Mitchell said. “There’s other markets, especially the Western world markets, where advertising is more expensive and less effective, where it was proving hard to make headway.” Lulu Yilun Chen , Bloomberg