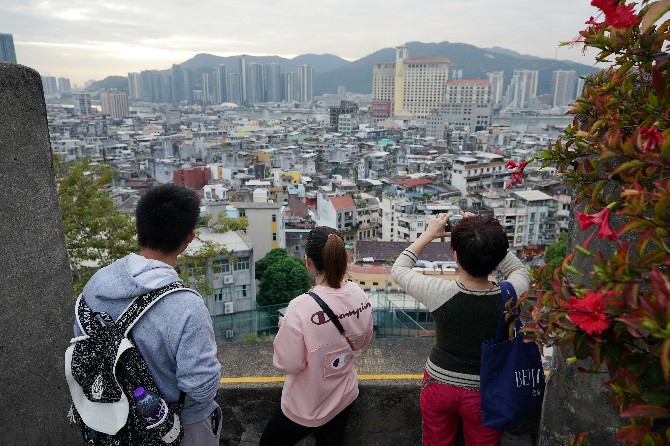 In this file photo, tourists are seen visiting the Mount Fortress in Macau

The last hopes for a summertime tourism recovery are now pinned on travel bubbles, geographic areas inside which people can traverse borders at a time when most borders worldwide are at least partly sealed.
Also known as “travel corridors” or “air bridges,” travel bubbles are designed to help kickstart the economies of countries or territories where the Covid-19 pandemic has already been brought under control. The idea is proving popular in many parts of the world, though only three Baltic states have made these travel corridors a reality.
China, one of the first jurisdictions to bring the virus under control, is considering a travel bubble that would span the mainland, Taiwan, Hong Kong, Macau and possibly even South Korea. But before that may or may not become a reality, many in the Pearl River Delta region expect some travel restrictions to begin easing on a more localized scale.
Efforts to standardize health check requirements between the three regions of Macau, Hong Kong and Guangdong Province are a sign that local and regional officials are working to lift border restrictions.
Authorities in Macau and Guangdong Province have begun rolling back several border crossing restrictions that have been in force since the first quarter. However, a critical requirement for all Guangdong arrivals to undergo mandatory 14-day quarantine remains in effect for the time being. As does a suspension of China’s popular Individual Visit Scheme, preferred by the majority of Macau’s gamblers.
An easing of local border controls would be a boon for tourism operators in the two special administrative regions, both of which have grown enormously dependent on mainland customers in the past two decades. Hong Kong stands to benefit in particular, as many of its tourism operators are still reeling from pro-democracy protests that crippled the city’s economy in the second half of last year.
Macau has not reported a new Covid-19 infection in seven weeks, but visitor arrivals and gross gaming revenue – two key indicators of the health of the economy – remain at near-zero levels.
As the local tourism industry closes out its fourth consecutive month without Chinese spending, employers across Macau are beginning to crumble. Stores in the ZAPE area, which rely on a flow of gamblers and other tourists, were seen vacating this month as the government’s raft of economic relief measures proved unable to offset high rentals in the city. Meanwhile, despite Chief Executive Ho Iat Seng’s appeal for casinos and other gaming-related companies to retain their staff, reports of layoffs at both the top and bottom of these organizations are becoming more common.
For some analysts, a regional travel bubble holds the potential to exploit months of pent-up travel demand across the Greater China region. An influx of Chinese spending could give local merchants the vitality to push through the economic downturn, even if visitor arrivals remain far below their historic levels.
Other regions also see potential in allowing cross-border economic activity to resume within strictly-defined geographical limits. They see travel bubbles as a way to ensure a minimum level of subsistence for tourism operators, while also keeping their citizens and residents safe from Covid-19. Here’s what the rest of the world is doing:

Bubble in the Baltic
The three Baltic countries of Estonia, Latvia and Lithuania are nearly a fortnight into their travel bubble experiment with no signs of an emerging second wave of infections.
The Baltic policy allows citizens and residents of the three European Union member states to move freely between one another, but anyone arriving from outside of the zone must self-isolate for 14 days.
The three sparsely-populated countries have fared better than many of their European neighbors, with a combined 4,500 cases and 150 deaths reported to date. On Monday, the trio reported a total of just 15 new cases of confirmed coronavirus infections.

Mediterranean corridor
Israel, Greece and Cyprus are in talks to build a travel corridor designed to jumpstart their respective tourism and aviation industries. The three countries reported a combined total of 23 new cases on Monday, with 17 of them in Israel.
While still at the proposal stage, the corridor could be extended to include other candidate countries, such as Georgia, Montenegro and Seychelles.
Some analysts predict a small-scale pilot project between Israel, Greece and Cyprus could launch as soon as next month, with pre-departure health checks of passengers a likely requirement.

Entente touristique
The United Kingdom and France were briefly in talks to save the summer holidays of millions of their citizens with an “air bridge” proposal that would grant immunity from mandatory quarantine requirements.
But an agreement signed earlier this month between the countries’ leaders, Boris Johnson and Emmanuel Macron, implying quarantine immunity for British and French residents, will not proceed as advertised. Dubbed an “entente touristique,” the measure was mainly aimed at truck drivers, according to the British press.
Instead, starting from June, all arrivals to the U.K. will need to undergo mandatory two-week quarantine. France has adopted a reciprocal measure, as per its policy for any European country requiring quarantine for French visitors.

Close ties down under
Neighbors Australia and New Zealand have been floating a trans-Tasman travel bubble proposal for weeks, though no concrete date has been proffered for its commencement.
Prime Minister Jacinda Ardern of New Zealand said on Monday that she expects to see Australian state borders re-open before the bubble is established. States and territories in Australia are deciding their own entry requirements, beyond general guidance for everyone to avoid non-essential travel. As of yesterday, border restrictions were in effect in more than half of the country’s states and territories.
In the meantime, calls are growing for the travel bubble agreement to be extended to Pacific island nations including Fiji and Vanuatu, where tourism is a key, or even main, pillar of the economy. Both nations have expressed an interest in joining the agreement.