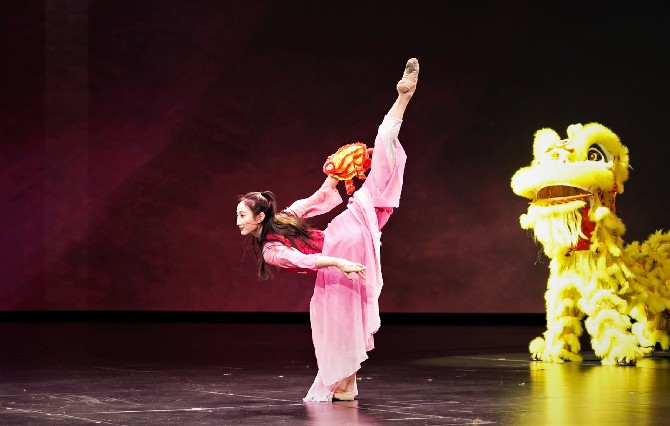 In the arts, mustering the courage to make a bold move always leads to huge rewards.
Catarina Lio, vice president of Brand Marketing of MGM China Holdings Limited has long been attuned to the importance of such a spontaneous practice in the creative arts industry.
In October last year, she was invited by the Cultural Affairs Bureau (IC) to watch the award-winning Chinese dance drama “Awakening Lion” at the Macao Cultural Center — alongside some 20 chirpy children enrolled in the MGM Junior Lion Dance Training Program.
The Lingnan folk dance drama is China’s first large-scale dance drama employing Cantonese lion dance as its core theme, which, to Lio, meshes well with MGM’s “lion” brand image.
After seeing the show, Lio made an intrepid move — she reached out to Shi Qianjin, president of the Guangzhou Song and Dance Theatre (GSDT) and director of the “Awakening Lion,” and asked if he could pay a visit to the MGM Theater. Despite a packed schedule, Shi said yes.
It was a difficult yet resolute decision for Lio. That day was a public holiday, meaning she had to rally efforts across various MGM departments to set up the stage up for Shi’s visit.
The move wound up with both Lio and Shi sitting at the stage of the MGM Theater, feverishly exchanging opinions about the differences between traditional and modern theatres. On the spur of the moment, Lio asked Shi: “Do you think your troupe can have a residence show here at MGM?”
Fast-forward to May 2021: Lio’s off-the-cuff invitation has blossomed into the realization of an ambitious theatric residence project titled “MGM Awakening Lion” —which is set to make its debut in July and amaze theatergoers and travelers in Macau.
On Monday, the duo gathered on the same stage, but this time they were presiding over the launching ceremony of their brainchild, the “MGM Awakening Lion,” an adapted and trimmed play from “Awakening Lion,” before hundreds of guests and media.
In an exclusive interview following the unveiling ceremony, the two shared with the Times the story of how they pulled off the joint venture.
“In retrospect, I was quite ‘lion-hearted’, daring to invite Shi and his troupe, who thought that the MGM theatre was not deep enough in dimension to offer them sufficient performance space for the show, ” Lio said.
Shi had reason to worry about the stage design. For most theatrical performances, ample backstage space enables performers or technicians to wait or move around. Without it, it is almost impossible for a large-scale show, with a sizeable number of performers, props and equipment, to be staged.
However, since its establishment in 2018, the MGM Theater, Asia’s first dynamic theater to offer immersive and multi-sensory theatric experiences to spectators, has hosted several residency shows over the past years.
“With these past experiences, we gave a strong dose of confidence to Mr. Shi that it is indeed technologically possible to put his show on our stage,” Lio said.

Bumpy at first;
Glorious at last
Sitting near Lio in a room next to MGM theater, Shi recalled the unforgiving paths the troupe had gone through before they arrived at today’s achievements.
Under Shi’s watchful leadership and coaching, the original dance drama “Awakening Lion,” has received many loyal followers among Chinese audiences, in addition to winning China’s top dance award — the “Dance Drama Award” at the 11th Lotus Awards in 2018.
With such an august title, some might have thought the show had a long history. In fact, Shi created the first 25-minute version of “Awakening Lion” in 2016. A year later, he conceived a fuller plot for a two-hour version of the dance drama. In 2018, the official brand of “Awakening Lion” was launched, with its debut show put on stage in September that year.
The show features a plethora of deep-rooted Chinese cultural elements, ranging from lion dance, China’s martial art forms Southern Fist (Nanquan), traditional Chinese dance, and other intangible aspects. It is a dialogue-free drama that draws on every movement and facial expression of performers to breathe life into the plot.
Shi told the Times that the troupe had spent a total of three years from 2016 to 2018 — some were novices at the lion dance —picking up the skills from scratch to later excel in them.
“Those three years were particularly physically tough for all of us. We encountered challenges we had never expected,” he remarked.
Dancing whilst hauling a heavy lion head is one of those challenges. It fatigued all the dancers at the beginning. This prompted Shi to re-schedule an even more challenging and compact practice, asking performers to receive lion dance training every afternoon and Nanquan practice every other day. The rationale was to prepare their bodies for the physically demanding performance that lasts for two hours.
He still vividly remembers how thrilling the first time was when actors and actress managed to rehearse the 2-hour show without interruption, as they all burst into “happy” tears immediately afterward.
Appeal to youths
Over the past years, Shi has been experimenting with ways to reframe traditional art forms, striving to strike a perfect balance between presenting the most authentic forms of Chinese cultures whilst appealing to modern viewers, especially younger ones.
“To me, the key success factor in a drama lies in whether it can evoke a resonance with viewers. If we kept all the performances at their traditionally basic form, it could only entice those who are interested in these cultures, but failed to resonate with most others,” Shi said.
To that end, he instilled a series of modern elements into components of the show, including the dance, costume, props, music, to give the show a strong cinematic vibe.
Alongside the performance, he invited a professional team to film a 30-minute documentary and forged partnerships with Hong Kong and Guangdong comic artists to create a namesake graphic novel for the show. These creative art and cultural products, Shi said, are some draw cards to keep young audiences engaged.
So far “Awakening Lion” has garnered a significant following from Chinese young audiences, as is evident by the large number of young people lining up at the show’s previous autograph sessions.
The main intention behind MGM bringing “Awakening Lion” to Macau is to “pass on the Lingnan heritage,” and “deepen the exchanges of cultural tourism in the Greater Bay Area (GBA),” Pansy Ho, co-chairperson and executive director of MGM stated earlier.
“Art is always the powerful and resonant platform to communicate Chinese traditional cultural values to today’s young audiences,” Shi said.
Macau, positioned as a leisure destination with a harmonious blend of Chinese and Western cultures, will be a great gateway for “Awakening Lion”, with its embedded Chinese cultural elements, to reach other parts of the world.
“It is a cinema-like dance drama. The emotive movements of the performance render dialogue unnecessary. The whole experience is as if you were reading a history book, in which you can grasp the gist of Chinese cultures and heritage, but can call the memories in mind with so much ease later,” Lio said.
The adapted version “MGM Awakening Lion” — truncated to 70 minutes from its original version of two hours — will be staged at the MGM Theater at MGM Cotai for four rounds, starting from July and running until February next year.