Wong says ‘equal rights are not absolute’ for migrants 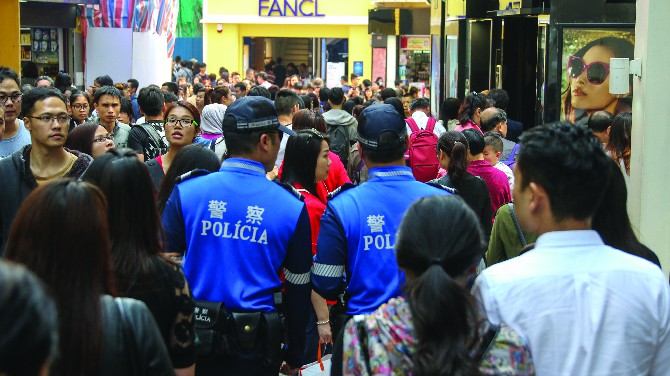 The Secretary for Security said that “equal rights are not absolute for migrant workers,” citing the Article 43 of the Basic Law, which also confirms the Public Security Police Force’s (PSP) argument that non-resident workers (TNR) do not have freedom of political assembly in public places.
“This type of limitations [and] reservations […] regarding the rights of non-residents is nothing new”, said Wong Sio Chak in a reply to TDM Radio.
According to the official, these migrant workers do not enjoy the same absolute rights as local residents do.
The comments were given following the alleged gathering of several Myanmar citizens expressing support for Aung San Suu Kyi, the recently deposed State Counsellor of Myanmar.
TNRs have no legal protection when conducting political assemblies, but they can make their voices heard through other legal channels, the PSP has previously stated.
However, pursuant to Article 43 of the Basic Law, individuals other than Macau residents in the Macau Special Administrative Region can legally enjoy the rights and freedom contained in this chapter.
Referring to Chapter 3, the basic rights and obligations of residents are stipulated therein.
The legal standing of the Basic Law is above all local legislations.
According to a brief explanation of the Basic Law written by vice-president of the Macau Basic Law Promotion Association, Ieong Wan Chong, the provisions on freedom of speech, association and protest should be applied to all people in Macau.
Lawyer Vítor Tang pointed out to the Times that the Basic Law was promulgated in 1999, six years after the protest law, hinting that an older law should not override a newer one.
It was reported earlier by Chinese media outlet Macau Concealers that the PSP had arrested two migrant workers for staging a protest at Rotunda do Carlos de Maia. The police authority has denied these allegations.
Earlier this week, the PSP disclosed to the radio station that a Burmese national had submitted a declaration of assembly to the PSP, which they retracted after four days without explanation. The location of the assembly was the roundabout.
The PSP said that on Sunday, February 21, there was an assembly at Rotunda do Carlos de Maia. Police considered the event an assembly, so it conducted a regular ID check.
The roundabout is a meeting place for migrant workers, especially those working as domestic helpers, to gather on their holidays. Normally they have weekly holidays on Sundays.
PSP stressed that that under law 2/93/M, the right to assembly and protest only applies to Macau residents. “Non-residents are not entitled to these rights.”