Works suspended at City of Dreams after fatal accident 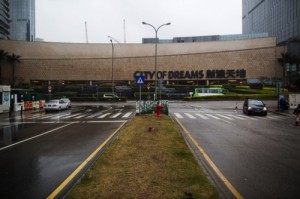 A 29-year-old local worker died yesterday around 11 a.m., after falling 10 meters with a lifting machine he was operating at the City of Dreams construction site.
Information suggests that the man was pinned under the machine on the ground following the accident and had to be rescued by firefighters. He was found dead at the scene.
The Labour Affairs Bureau (DSAL) released a statement yesterday afternoon, saying that it has investigated the accident and suspects that the lifting machine was overloaded, causing it to tip to its side before falling to the ground.
The bureau has already instructed the contractor to cease all operations involving lifting machines on the site and to conduct a thorough review of the equipment and relevant procedures. It has also recommended that workers be educated on industrial safety practices. It will continue to investigate the accident and will lawfully pursue the responsible individual.
Cheong Man Fun, president of the Macau Construction Industry General Union, told TDM that there is still no official training for workers using construction vehicles. He hopes that the government can invest more effort into promoting the issue. “Currently, the government is providing some certifications [regarding construction vehicles]. However, these are only for locals. For non-resident workers, [the certifications] are still not available,” he said.
The Times contacted the City of Dreams for comment but was unable to obtain a reply before publication. JPL