CHINA-INDIA China’s Defense Ministry cautioned New Delhi yesterday over Indian plans to construct 54 new border posts along an eastern stretch of their disputed frontier. Spokesman Yang Yujun said China urged India to do more to maintain peace and stability in the area and “not to do things that may complicate the situation.” 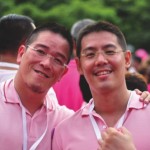 SINGAPORE Three gay men lost their fight to overturn Singapore’s ban on sex between males, as judges at the nation’s highest court ruled that the 76-year-old law is constitutional. Kenneth Chee and Gary Lim (pictured), the couple who challenged the ban, said they are “deeply disappointed” and hope parliament will consider their case. The “decision is a terrible setback for homosexual people in Singapore who want to live their lives like everyone else, without government interference,” New York-based Human Rights Watch said.

S KOREA A South Korean military court sentences six soldiers to up to 45 years in prison for bullying and beating a subordinate who died. Military prosecutors said the soldiers bullied the victim regularly for about a month, and struck him in the chest and forced him to swallow a chunk of food that lodged in his throat before he died in April.

SRI LANKA There is no hope of finding survivors after a mudslide tore through a tea plantation, a Sri Lankan disaster official says, amid widely conflicting reports about how many people had been buried alive under the mud. More on p11

BURKINA FASO Protesters surged passed police lines yesterday and broke into Burkina Faso’s parliament ahead of a vote to allow the president to seek another term next year.

SYRIA Activists say 10 Iraqi Peshmerga fighters have entered a northern Syrian border town, the first from among a group of 150 Kurdish troops on their way into the embattled Kobani. Kobani-based activist Musrafa Bani says 10 fighters entered the town. He says the rest were set to follow gradually yesterday because the border crossing point has been targeted by Islamic State fighters.

USA State police plan to monitor the movements and interactions of a nurse who vowed to defy the state’s quarantine for health care workers who treat Ebola patients, but troopers cannot take her into custody without a judge’s permission. State officials were seeking a court order to detain Kaci Hickox for the remainder of the 21-day incubation period for Ebola that ends on Nov. 10.

PHILIPPINES-USA  A security pact that allows thousands of American troops to join large-scale combat exercises in the Philippines is “imperfect” but Manila is unlikely to amend it, the country’s top diplomat says.