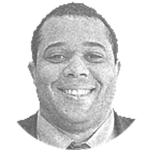 President Donald Trump promised to hit 3 percent growth in 2017 — and the economy just barely made it, according to figures released last week. To keep it going, the administration is going to have to change its approach on the three main issues that will drive future growth: trade, taxes and immigration.

The biggest drag on growth came from changes in international trade, which subtracted $55 billion from GDP last year. Trump’s aggressive trade policy is intended in part to improve economic growth. Despite what you might read on Twitter, however, trade wars are difficult to win.

Some trade actions were matched by counteractions. China’s tariffs on U.S. agricultural products, for example, have had a devastating impact on farmers.

But there are two even more powerful negative side effects of the trade war. First, it seems to be exacerbating economic turbulence in China and Europe, where the continent’s third-largest economy is already in a recession. As more European nations face a recession and the Chinese economy slows down, consumers on two continents will cut back on purchases of all kinds — including American goods.

A global recession also makes investors more reluctant to start new projects. That compounds the second side effect from the trade war: uncertainty. It’s impossible to know how long the trade war will last or which products will be targeted next. In that environment, it makes sense for potential investors to take a wait-and-see approach.

The combination of these two side effects kept investment muted throughout 2018. This is tragic, because the primary goal of the tax reform law of 2017 was to spur business investment. And while it has been quite strong in intangibles such as intellectual property, investment in large physical projects slowed remarkably near the end of the year.

Ideally, a boost to investment will come with a swift end to the trade war. But if that’s not in the cards, the administration might consider revisiting that 2017 tax reform.

That law allowed the cost of certain investments to be deducted immediately, which not only encouraged such investment but also reduced business taxes. But the change was temporary and limited — crucially, it doesn’t apply to actual physical structures, some of the longest-lived and most important investments in the economy. Democrats and Republicans should work together to make the change broader and permanent. With this single act, Congress could help raise the productivity of the U.S. worker.

Even as Congress works to make Americans more productive, it should also acknowledge that the U.S. is in desperate need for skilled immigrants — especially in technology and health. The relative short supply and resulting high wages for skilled employees is a major contributing factor in the high cost of health care.

That cost is a drag on the rest of the economy, too, making care more expensive for employers and taxpayers. At the same time, it represents an underlying demand that could be a source of growth. The U.S. is also a leader in medical technology, and if the sector had more skilled workers, prices would fall and innovation would rise.

Would the president support such a change in immigration policy? That remains to be seen. But remember that he proposed increasing legal immigration just last month in his State of the Union speech. Democrats should enthusiastically accept his offer.

Admittedly, this blueprint for future growth — end the trade war, extend tax reform and expand legal immigration — may seem unlikely for this administration. Yet most economists would have said the same thing about its goal of achieving 3 percent growth in an economy with already low unemployment. Repeating that performance will be difficult, requiring the administration to stand up to the anti-growth forces within its ranks. But the potential rewards, both political and economic, are worth the effort. Karl W. Smith, Bloomberg

Banking on getting illusory US protection ruinous gamble for Taiwan secessionists