Eight of the world’s largest casinos ranked by annual gambling revenue are located in Macau, according to data compiled by the Global Betting and Gaming Consultancy (GBGC), based in the Isle of Man.
The GBGC research shows that Galaxy Macau, SJM Grand Lisboa and City of Dreams, Wynn Macau and The Venetian are the five top casinos in the world based on Gross Gaming Yield (percentage of wagers kept by casino/gaming operator). Marina Bay Sands and Resorts World Sentosa, both located in Singapore, also made it to the top ten list.
Crown Melbourne was nudged into 11th place, Genting Highlands was ranked 12th, while Sands Macau and Kangwon Land, South Korea, ranked 13th and 14th respectively.
In the United States, Wynn is the largest casino by gaming revenue, having profited USD0.69 billion last year.
“In many respects the comparisons are not fair because Las Vegas has diversified its product mix towards entertainment, food and beverages, where the split is probably 55 percent entertainment and 45 percent gaming,” the consultancy company explained in a press release distributed by Business Wire.
GBGC nonetheless recalled that the United States remains the largest casino market in the world, followed by Macau, Canada, Singapore and Australia. CP 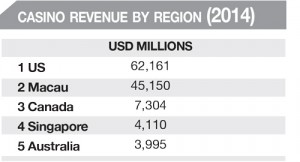