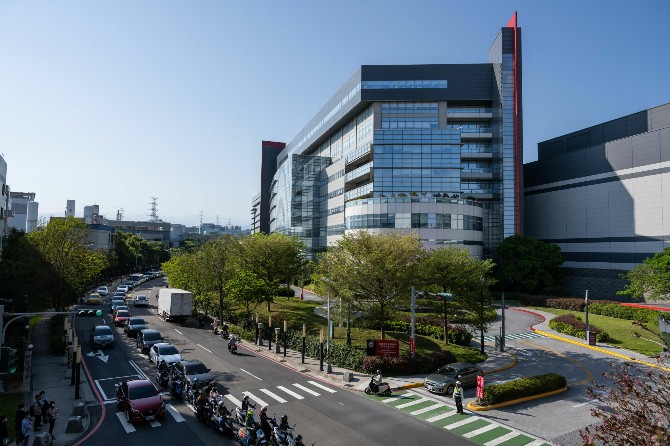 Back in February, as the world was beating a path to Taiwan’s door for help to tackle a shortage of semiconductors, the health minister got into a scrap with China over Covid-19 vaccines.
Beijing, he suggested, had used political pressure to derail Taiwan’s plan to purchase five million doses directly from Germany’s BioNTech SE, rather than via a Chinese company which held the rights to develop and market the BioNTech-Pfizer Inc. vaccine across China, Hong Kong, Macau and Taiwan. Foreign Ministry spokeswoman Hua Chunying retorted that Taipei “should stop hyping up political issues under the pretext of vaccine issues.”
Three months later, Taiwan is paying the price for a lack of vaccines, with a surge in virus cases that threatens to trigger a lockdown. Having successfully sidestepped the first Covid wave, the government now faces a health emergency — only about 1% of its population is vaccinated so far — with the potential to disrupt the chip industry that dominates the local economy, and which is critical to an already-squeezed global supply.
That’s a link made by the head of Taiwan’s office in New York, who warned of “logistical problems” without access to more shots. Yet by shunning vaccines from China and warning of more chip shortages if it can’t source enough doses elsewhere, the government is giving even greater incentive to the world’s biggest economies to make investments that may erode Taiwan’s competitive edge in semiconductors over the long term.
Taiwan’s predicament illustrates its strategic yet vulnerable position at the confluence of U.S.-China tensions. Separated by a 110 mile-wide strait, Taiwan is regarded as a province by Beijing and its conquest is President Xi Jinping’s key goal for historical and ideological reasons. The U.S. is an ally of Taipei’s democratic government and a big buyer of its exports, dominated by chips produced by Taiwan Semiconductor Manufacturing Co.
The onset late last year of chip shortages that have hobbled industries from autos to computer gaming had looked to give Taipei global leverage. TSMC is the world’s leading provider of cutting-edge semiconductors and holds 56% of the so-called foundry business of manufacturing chips designed by customers including Apple Inc. and Qualcomm Inc.
But Taiwan has suffered a sudden reversal of fortunes. The pandemic comes just as a drought triggers power outages, stoking economic uncertainty and a slump in what was the world’s best performing stock index in the four years to January.
What’s more, the very source of Taiwan’s recent geopolitical clout — its dominance of the market for cutting-edge chips — is under attack as governments from the U.S. to Europe and Japan, alerted to the strategic nature of the semiconductor supply chain, seek to spur production at home. China is pumping billions into catching up after Washington imposed export controls on U.S. chip technology.
“I think we’ve become too dependent on Taiwan and Korea, that’s the point, we need a more balanced global supply chain,” Pat Gelsinger, chief executive officer of Silicon Valley’s Intel Corp., the world’s biggest chipmaker, said in an interview. The U.S. and Europe should act “more aggressively” to counter the “imbalance” of Asia’s lead in manufacturing semiconductors that are mostly consumed in the west, he said.
Intel is a rival and plans to challenge TSMC at the cutting edge, but Gelsinger isn’t the only voice making for uncomfortable listening in Taiwan. Commerce Secretary Gina Raimondo said this month that while the Biden administration is working with Taipei and TSMC to address the chip shortage, it’s also looking to reduce U.S. dependence on Taiwan. TSMC is in the process of building a new fabrication facility in the U.S. 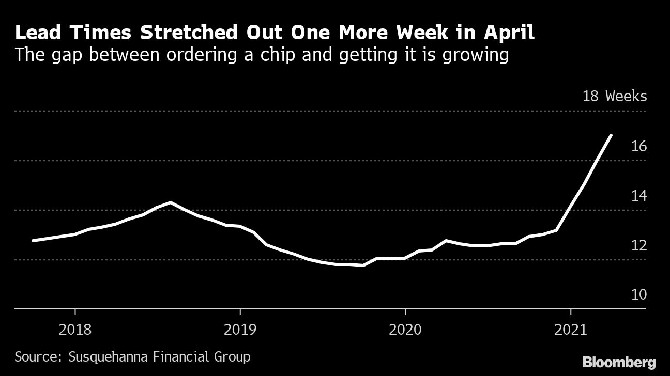 Some in Washington have suggested that Taiwan is a backdoor to China by enabling tech transfers. Republicans Michael McCaul and Tom Cotton have called on the administration to engage with Taipei to do more to “mitigate the risk of Taiwanese companies providing services and technologies to entities of concern,” a reference to Chinese state-backed companies with links to the military.
With the prospect of some $50 billion in government funding to build out chip making in the U.S. and the promise of still more in Europe and South Korea, there are signs that Taiwan is starting to feel the heat.
The government is working to draft a new export control list targeting technologies with military use, to tighten curbs on exports to China and raise the penalty for violations, according to a person familiar with the issue who asked not to be named discussing policy deliberations.
That’s after Alchip Technologies Ltd’s stock took a beating in April when the Washington Post reported that it supplied chips to Phytium, a People’s Liberation Army-affiliated entity. Alchip said it has always been in compliance with government regulations and that Phytium projects were on hold.
Taipei has become more alert to the possibility of Chinese companies ramping up efforts to recruit Taiwanese engineers. Last month the Cabinet met to discuss how to prevent the outflow of local talent, with the Ministry of Labor instructing local job-search websites to remove ads recruiting Taiwanese citizens to work for China, particularly in the semiconductor industry.
Companies and headhunters can be fined as much as NT$500,000 ($17,900) for advertising such jobs and NT$5 million for facilitating local engineers’ employment with Chinese companies on the mainland, ministry official Huang Chiao-ting said. Job search site 1111 said it has removed close to 3,000 job listings. Investigators have visited the local offices of four Chinese companies, including Bitmain Technologies Ltd, within the last two months to look into allegations they recruited engineers illegally.
“By more aggressively investigating Chinese companies’ efforts to poach Taiwanese engineers, we hope we can help prevent potential trade secrets leaking to China should local talent get hired away,” said Judy Chen, a spokeswoman for the Hsinchu District Prosecutors Office. She declined to name the other companies probed.
Members of the ruling Democratic Progressive Party are considering amending the law to boost penalties for intellectual property theft. Lawmaker Chao Tien-lin is proposing life sentences for those found guilty of economic espionage, a crime not currently on the statute books in Taiwan.
“Taiwan needs to win trust from its partners and help prevent China from building a supply chain from stolen technology,” Chao said in comments provided by his assistant.
Whether it’s enough to allay concerns in Washington may become clearer with the publication of President Joe Biden’s review of the semiconductor supply chain. The 100 day review is due to conclude on June 4. What’s already known is that there is bipartisan support to build U.S. chip making, and Taiwan is in the cross hairs.
“Taiwan dominates semiconductor manufacturing, and one company, Taiwan Semiconductor Manufacturing Company, virtually controls the market,” Senator John Cornyn, a Texas Republican who introduced the CHIPS for America Act to boost U.S. production, said on the Senate floor this month.
The sustainability of Taiwan’s industry has also come into question after it suffered power outages this month, focusing attention on environmental factors including water shortages and uncertainty over future electricity supply for power-hungry chip plants.
Yesterday, shares in tech companies such as smartphone maker Xiaomi Corp. and computer giant Lenovo Group Ltd. slid over concerns that Taiwan’s Covid outbreak could further jeopardize semiconductor supplies.
Taiwan can potentially overcome the virus outbreak as well as the power and water shortages, showing its companies “can still satisfy global demand by manufacturing mostly in Taiwan without any issue,” said Arisa Liu, a researcher at the Taiwan Institute of Economic Research.
In the short term that will require vaccines. On Saturday, the chairman of Shanghai Fosun Pharmaceutical (Group) Co. Ltd., the Greater China distributor of the BioNTech-Pfizer vaccine, told China’s state-run Xinhua News Agency that the company was willing “to use the vaccine to serve Taiwan compatriots.”
But it’s unclear if Taiwan would now accept a vaccine deal that goes through Fosun, making it more likely any shots will come from Europe or the U.S. According to Chunhuei Chi, a former health-policy adviser in Taiwan who is now director of the Center for Global Health at Oregon State University, “many politicians in Taiwan urged the Taiwanese government to use microchips as leverage” for vaccines.
While the government is reluctant to use that leverage explicitly, he said, “if the U.S. is concerned about the supply of chips from TSMC, the U.S. would have incentives to provide Taiwan with vaccines to make sure production will not be disrupted by this outbreak.” Alan Crawford, Debby Wu & Iain Marlow, MDT/Bloomberg