Wuhan coronavirus | Government says it is prepared for worst-case scenario 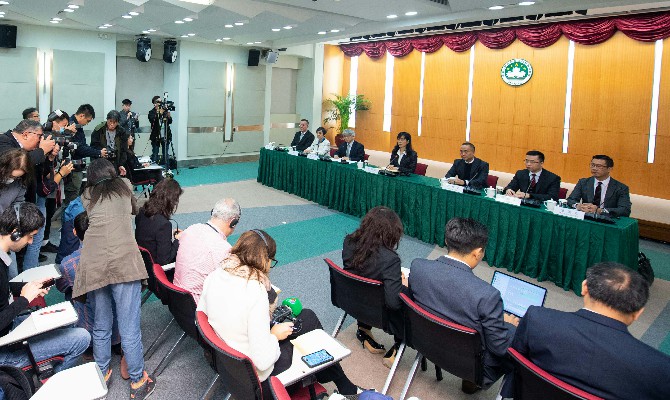 The government admitted yesterday it has already considered and prepared for a ‘worst-case scenario’ amid the coronavirus outbreak on the mainland, though it would not disclose what such a scenario would look like nor what measures could be taken.
Elsie Ao Ieong U, vice president of the government’s epidemic task force, hinted at the preparations during yesterday’s daily press briefing. The secretary said she did not consider it the appropriate time to disclose the preparations or any potential responsive measures currently being considered.
Over the past couple of weeks, the government has been adjusting its measures from time to time, from barring tourists from Hubei to encouraging the offering of lodgings for foreign workers who live across the border in Zhuhai and further north. The journalist was hence curious to know what the ultimate measures are under a presumed worst-case scenario.
The vice president elaborated on her response by saying, “Measures on epidemic control will be updated from time to time, but it will be conducted according to the development of the situation.”
For the time being, regular and thorough hand washing is one of the few ways to help epidemic control, says the health authority.
There are currently eight confirmed cases of the novel coronavirus in Macau, with no further cases reported yesterday. The latest case involves a local woman, however the government said on Sunday that it would treat the patient as an imported case because health authorities suspect she contracted the coronavirus while visiting the mainland.
After the first infection was confirmed in Macau, local people rushed to the streets to source sanitizing materials and facemasks. The government has centralized the supply of facemasks, but stock of sanitizing materials is reportedly running low across the city.
The Health Bureau (SSM) was asked whether they have plans to also centralize the supply of such materials.
In response, Dr Lam Chong, head of the SSM’s Centre for Disease Control (CDC), reminded, “Soap [either in liquid or solid form] and water are also good sanitizing agents that are widely accessible.” On the Bureau’s website, there is a video instructing people how to wash their hands correctly.
“Alcohol sanitizer is not a must in sanitation. It can be used when there is no hand washing facilities nearby,” the doctor added.
Amid neighboring Hong Kong’s announcement that it would close its four border control points, the Macau government said yesterday that it has no plan to close the city’s border due to the significant amount of foreign workers crossing it daily to travel between home and work (more on p4).
According to the Public Security Police Force, which oversees immigration matters in Macau, an average of 35,000 foreign workers need to cross the border to commute between their workplace in Macau and home in Zhuhai.
Nonetheless, the government has been in constant discussion with the private sector, which was encouraged to provide temporary housing for their foreign workers who live on the north side of Macau.
“This measure is introduced to lower [the number of] border crossings,” explained Ao Ieong, Secretary for Social Affairs and Culture and vice president of the government’s epidemic control work group.
Several days ago, the vice president cited the Basic Law, the so-called mini-constitution of the special administrative region, to highlight the lack of legal grounds for a border closure. The law stipulates Macau residents’ rights to travel freely. Ao Ieong further noted border closure was not feasible due to Macau’s reliance on foreign workers living in the mainland.
The SSM revealed that it now has about 2,700 sets of coronavirus test kits. In the foreseeable future, there is more stock coming in. It is believed there will not be a shortage of kits.
The novel coronavirus outbreak has infected more than 17,300 people globally, among which there are 17,205 cases in the mainland and 14 in Hong Kong. Most of the 361 deaths have been in central Hubei province, where illnesses from the new type of coronavirus were first detected in December.