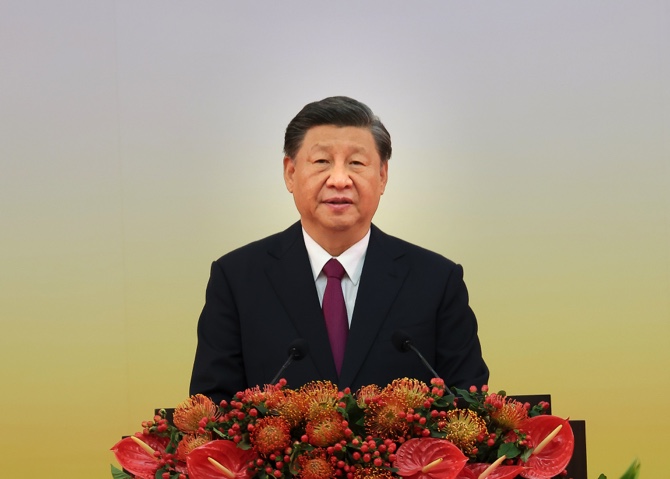 President Xi Jinping on Friday expressed confidence in Hong Kong’s take-off toward “a splendid feat” with the solid implementation of “one country, two systems.”

Hong Kong will share the glory of the great rejuvenation of the Chinese nation with the rest of the country, Xi said when attending a meeting celebrating the 25th anniversary of Hong Kong’s return to the motherland and the inaugural ceremony of the sixth-term government of the Hong Kong Special Administrative Region (HKSAR).

The president extended cordial greetings to all Hong Kong residents when addressing the events.

Recalling history, throughout which Hong Kong compatriots have always stood together with the motherland, Xi praised the new era of Hong Kong since its return to the motherland in 1997 and the resounding success of “one country, two systems.”

The practice of “one country, two systems” has achieved success in Hong Kong recognized by all, Xi said.

“There is no reason for us to change such a good policy, and we must adhere to it in the long run,” said Xi, whose Hong Kong trip has gained widespread international attention.

Hong Kong is in a new stage of transitioning from chaos to order and then to greater prosperity.

The next five years will be crucial for Hong Kong to break new ground and achieve another leap forward, said Xi, also general secretary of the Communist Party of China Central Committee and chairman of the Central Military Commission.

Hong Kong is in a festive mood. Flags adorn avenues and alleys, red lanterns line the overpass to the main pier of the Hong Kong Island, and neon-lit celebratory messages can be seen on the facades of skyscrapers against the night sky.

Hong Kong people have every reason to be joyous on the celebratory occasion and proud of their achievements over the past quarter of a century.

Since its return to the motherland, Hong Kong has overcome various difficulties and challenges and forged ahead with steady steps, Xi said, lauding Hong Kong’s “irreplaceable contributions” to the development of the motherland.

Over the years, Hong Kong has become an integral part of the country’s overall development and actively aligned with national development strategies.

The Guangdong-Hong Kong-Macao Greater Bay Area, a significant national project, for example, has brought about new opportunities for Hong Kong.

Xi hailed the true democracy Hong Kong has enjoyed after its return to the motherland, which ensures the democratic rights of Hong Kong residents and helps maintain Hong Kong’s prosperity and stability.

These have provided Hong Kong with a solid institutional guarantee to overcome immediate difficulties, achieve good governance, and ensure lasting security and stability.

Xi’s Friday address reiterated implementing the principle of “one country, two systems” in both letter and spirit without deviation or wavering.

Upholding national sovereignty, security and development interests is the policy’s paramount principle. On the basis of this prerequisite, Hong Kong and Macao maintain their capitalist systems in the long run and enjoy a high degree of autonomy, he said.

The more firmly the principle of “one country” is upheld, the greater the advantages the “two systems” will demonstrate in practice, Xi said.

He emphasized both enforcing the central authorities’ overall jurisdiction and upholding the special administrative regions’ high degree of autonomy.

The president voiced firm stance of keeping the power to administer the HKSAR “in the hands of patriots,” which is essential to safeguarding the long-term stability and security of Hong Kong.

“There is no country or region in the world where its people will allow an unpatriotic or even treasonous force or figure to take power,” he said.

Xi expects the new government to take on a new look in good governance.

The president’s hopes for the new government involve improving governance, strengthening the city’s growth momentum and addressing difficulties in people’s lives. Harmony and stability are also high on the agenda.

There is an extensive consensus that no time should be lost in Hong Kong’s development and that all interference should be removed so that Hong Kong can stay focused on development, according to Xi.

Xi pledged the central government’s support for Hong Kong’ development, including the maintenance of its “free, open and sound business environment.”

Xi met with Lee after his inauguration.

Being aware of the immense responsibility on his shoulder, Lee pledged to lead the HKSAR government in improving governance and making new advances in Hong Kong’s development.

“Over the past five years, I have always been concerned about and caring toward Hong Kong, and my heart and the heart of the central government are always with our Hong Kong compatriots,” Xi said upon his arrival in Hong Kong on Thursday.

These words echoed a well-known soundbite from his trip to Hong Kong five years ago, during which he said, “Hong Kong’s development has always pulled at my heartstrings.”

Over the years, Xi has interacted with young Hong Kong people on many occasions, offering encouragement, addressing their needs and helping them improve their lives.

Friday’s address once again demonstrated Xi’s care for the people of Hong Kong.

Currently, what the people of Hong Kong desire most are better lives, bigger homes, more business start-up opportunities, better education for their children and better elderly care, Xi said. Expressing hope for the new HKSAR government, he said, “What the people call for, we must strive to deliver.”

Xi’s trip to Hong Kong included meetings with senior officials and dignitaries, and warm exchanges with researchers and entrepreneurs in the Hong Kong Science Park. He also inspected the Hong Kong Garrison of the Chinese People’s Liberation Army.

At the West Kowloon high-speed rail station, people from all walks of life bid the president a warm farewell, waving flags and flowers and singing songs.

Among the crowd were many young people, upon whom Xi has pinned high hopes for the future of Hong Kong. They will, as the president said, have more opportunities to “grow and shine.”  Xinhua