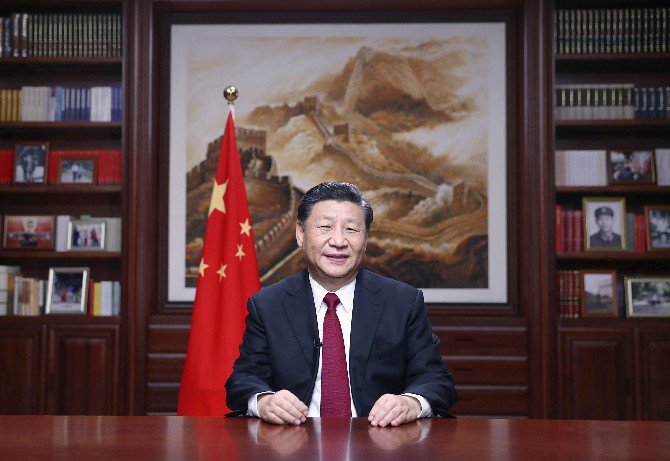 President Xi Jinping used his New Year’s Eve address to defend China’s system for running Hong Kong, in an unusually high-profile acknowledgment of the Asian financial center’s political turmoil.
The Chinese president expressed concern for Hong Kong, which has been gripped by more than six months of often violent protests by activists demanding greater autonomy from Beijing. Xi argued the success of neighboring Macau, which he visited earlier this month, shows that the “one country, two systems” framework used to govern both former European colonies “is fully applicable, achievable and popular.”
“Without a harmonious and stable environment, how can people live in peace and enjoy their work?” Xi asked, wearing a suit and seated behind a desk. “I sincerely wish Hong Kong well. Hong Kong’s prosperity and stability is the wish of Hong Kong compatriots and the expectation of our motherland.”
Xi’s remarks come at a time when “one country, two systems” is facing new skepticism in Hong Kong and Taiwan, where even the China-friendly opposition has come out against the model. Xi began 2019 with a speech reaffirming his desire to use the same framework to bring the self-ruled island of 23 million people back under Beijing’s control.
That prospect was again rejected by Taiwan’s president, Tsai Ing-wen, who reiterated the stance in her own annual new year’s speech in Taipei. “Hong Kong is an example to show ‘one country, two systems’ is not feasible, as democracy and authoritarianism cannot coexist in one country,” said Tsai, who faces reelection on Jan. 11 against a more China-friendly opponent, Kaohsiung Mayor Han Kuo-yu.
Tsai praised lawmakers’ vote Tuesday to approve the so-called Anti-infiltration Act, which curbs political donations, lobbying and election interference by “external hostile forces.” China’s Taiwan Affairs Office accused the Taipei government of sabotaging relations for political gain, the Xinhua News Agency reported.
Xi’s comments on New Year’s Eve were only his latest allusion to Hong Kong’s turmoil in recent months, an indication of greater interest from Beijing in the unrest in the former British colony. Xi and other top leaders said little about the city in the first months after historic protests erupted in June.
The speech was otherwise broadly confident, as China’s economic slowdown shows signs of stabilizing and Xi nears completing a “phase one” deal to ratchet down his trade war with U.S. President Donald Trump. While Xi last year urged self-reliance amid “changes unseen in 100 years,” he focused more this year on achievements that “demonstrate extraordinary Chinese splendor and Chinese strength.”
In 2019, the Communist Party weathered politically sensitive anniversaries, including three decades since the Tiananmen Square crackdown and 70 years since Mao Zedong led the party to power. In the coming year, Xi pledged to complete his goal to eliminate poverty in rural areas, part of a bid to improve growth and mitigate social discontent to strengthen the party’s rule.
“The year 2020 is a milestone year,” Xi said. “We will achieve a moderately prosperous society, win the battle against poverty and lift all rural residents out of poverty.”
The U.S. and China are arranging a formal signing ceremony of what they say is the first phase of a broader trade after Xi and Trump spoke by phone in late December. Trump said Tuesday that he would sign the deal with China on Jan. 15 and make a trip to Beijing, where the second phase of negotiations would begin.
A deal could help stabilize China’s economy, with analysts and traders predicting earlier this month that economic growth will come in at 5.9% in the new year as easing trade tensions and the prospect of lower bank borrowing costs boost confidence. The economy will grow by 6.1% this year and by 5.8% in 2021, according to the median estimate of around 70 economists in a Bloomberg survey.
Although Xi highlighted his meetings with world leaders, he made no specific mention of tensions with the U.S., such as congressional action to support protesters in Hong Kong and punish China for its treatment of its ethnic Muslim minority in Xinjiang.
“The long river of history runs on, sometimes calm and sometimes rough,” Xi said. “We will not be afraid of storms nor intimidated by obstacles. China will unswervingly follow the path of peaceful development, firmly uphold world peace and promote common development.” Bloomberg