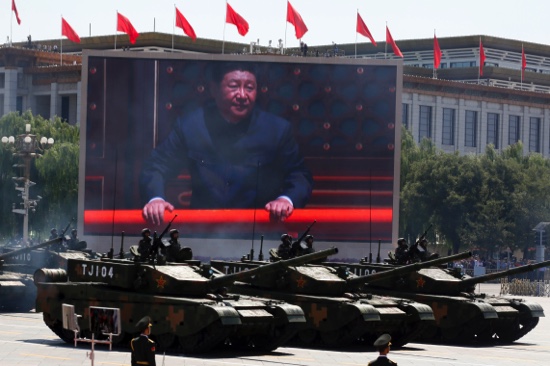 Bolstering his status as China’s most powerful leader in decades, Chinese President Xi Jinping has assumed a more direct role as head of the country’s powerful armed forces with the new title of commander in chief of its Joint Operations Command Center, state media and analysts said yesterday.
Xi’s new position was revealed in news reports that featured prominently on national news broadcasts Wednesday and yesterday in which he appeared publicly for the first time in camouflage battle dress wearing the joint center’s insignia.
During his Wednesday visit, Xi called on the center’s staff to “closely follow the trends of global military revolution and strive to build a joint battle command system that meets the need of fighting and winning an informationized war,” the official Xinhua News Agency said.
Officers should “change their ideas, innovate and tackle difficulties, in a bid to build a joint battle command system that was absolutely loyal, resourceful in fighting, efficient in commanding and courageous and capable of winning wars,” Xinhua quoted Xi as saying.
Battle command capacities should be measured by “the standards of being able to fight and win wars,” Xi said, stressing the need to prepare for conflicts, analyze possible security risks, and handle effectively “all sorts of emergencies.”
The joint center, reportedly located underground in the western outskirts of Beijing, is under the direct supervision of the ruling Communist Party’s Central Military Commission, which is headed by Xi and oversees the 2.3-million-member People’s Liberation Army, the world’s largest standing armed forces.
Xi was accompanied on his visit by the commission’s two vice chairmen, Gen. Fan Changlong and Gen. Xu Qiliang.
Among his several other titles, Xi is also leader of the ruling Communist Party and chair of a recently created National Security Council, which gives him greater control over the domestic security services.
As head of the military, Xi has overseen a reorganization of the PLA’s command structure into five theater commands aimed at better integrating the different services. He has ordered a 300,000-person reduction in forces that will see the elimination of many outdated and non-combat units, and shift the emphasis further from ground forces to the navy, air force and missile corps.
Xi’s appearance in battle dress with insignia Wednesday emphasized his more direct role in military affairs. When appearing simply as head of the Central Military Commission he routinely wears olive green tunics, shirts and trousers without insignia or decoration, as did his predecessors.
Xi’s new choice of apparel “indicates that he not only controls the military, but also does it in an absolute manner, and that in wartime, he is ready to command personally,” said Ni Lexiong, a military affairs expert at Shanghai’s University of Political Science and Law.
Three years since taking on the presidency, Xi is widely seen as having accumulated more power and authority than any Chinese leader since Deng Xiaoping in the late 1980s. A cult of personality has also sprung up around him to rival that of the founder of the communist state, Mao Zedong, with his slogans, sayings and signature political themes widely disseminated in the media.
Yet his reputation has also been called into question by anonymous letters, allegedly from Communist Party members, calling for his resignation. Revelations in the international media about vast wealth accumulated by members of his extended family have meanwhile flown in the face of his relentless campaign against corruption in the party, military and state industries.
Xi’s new title and his visit to the joint center were “more political than military” in significance and don’t imply he will take charge of the day-to-day running of the PLA, said Andrei Chang, Hong Kong-based editor of the magazine Kanwa Asian Defense and a close observer of Chinese military affairs.
“Throughout Chinese history, political power has always been founded on control of the military,” Chang said. “This was a visit to show off his muscle to his potential enemies and show that he is tough and in charge.”
Xi’s new title and appearance in battle dress may also be a deliberate message to China’s chief rivals, including the U.S., Japan, the Philippines and the self-governing island of Taiwan that China has vowed to conquer by force if necessary.
“The combat uniform is not only to show he is in charge of the military, but also shows that China is ready for a fight amid a tense external situation. It is a bit like telling China’s opponents that he is ready for a combat,” Ni said.
Along with his structural and personnel reforms, Xi has highlighted the PLA’s importance with frequent, highly publicized visits to military bases and a massive parade last September that saw the army’s latest equipment wheeled through the center of Beijing while warplanes and helicopters roared overhead.
Xi enjoys special cachet with the armed forces, partly due to his late father’s status as a military commander and Xi’s own brief service as a uniformed aide to a former defense minister, but also because his muscular foreign policy is popular among Chinese nationalists and the defense establishment.
That’s been especially true in the disputed South China Sea, which China claims virtually in its entirety and where it has constructed island airfields on former coral reefs and sought to limit the U.S. Navy’s ability to operate in the area.
Xi has remained resolute in that approach despite it being blamed for raising tensions with China’s Southeast Asian neighbors and prompting the U.S. to devote more resources to Asia and strengthen its cooperation with traditional allies and even former foe Vietnam.
“The most important message he meant to send to the world is that he will not make a concession on the issue of territory even at the cost of a war,” Ni said. Christopher Bodeen, Beijing, AP