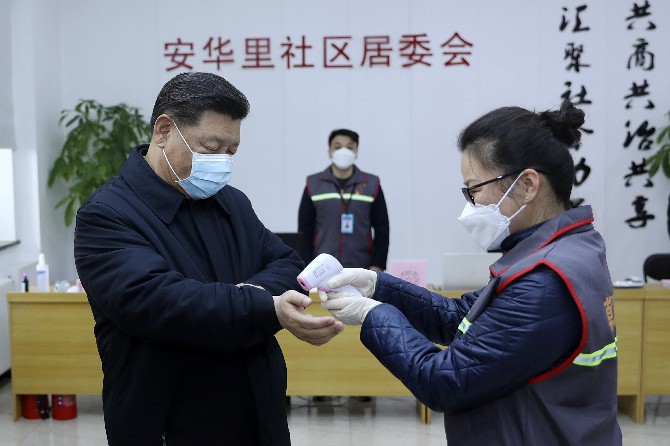 Chinese President Xi Jinping visited the Chaoyang district in Beijing yesterday, according to state-run media Xinhua, which published photos of Xi wearing a mask and having his temperature taken. The public appearance has finally put to rest several online rumors that had been circulating on social media regarding the president’s unusual absence from state media reports for one week prior.
The top leader of the Chinese Communist Party has not visited Wuhan since the outbreak of the epidemic. Xi’s absence from the center of the epidemic has also drawn the public’s interest.
As of today, the 2019-nCoV epidemic outbreak has been spreading for more than two months, considering that the actual first recorded case can be traced back to December 1 of last year. As of yesterday at least 40,241 infections have been confirmed, with at least 908 deaths and 3,396 recoveries on record.
Mainland cities have been implementing various transmission prevention measures, including shutting down businesses and closing communities.
Xi Jinping, has issued several directives to combat the epidemic, according to mainland Chinese state media, despite not having made appearances on state-owned propaganda media outlets as frequently as usual.
In mainland China, Chinese top leaders are featured almost daily on the 7 p.m. national news of CCTV, which airs on nearly all TV channels in mainland China.
However, for a consecutive period of seven days, top Chinese communist leader Xi Jinping has not appeared on the 7 p.m. daily CCTV news.
Before January 28, CCTV reported that Xi Jinping was still “personally directing” the fight against the epidemic. On February 3, a CCTV report announced that Xi was still personally in charge of handling the situation. However, no images of him were shown. Instead, the anchor read the news for 13 consecutive minutes without any images of Xi or any other Chinese official.
Besides his disappearance from the mainland’s top media propaganda machine, there is no public indication that Xi has visited the epicenter of the outbreak in Wuhan. The highest Chinese government official to have made a visit to Wuhan after the epidemic broke out is Prime Minister Li Keqiang, who went to the city on January 27.
His absence from Wuhan has drawn both domestic and international attention.
Whereas mainland leaders appear to have retreated from the media frontline when it comes to the epidemic, the leaders of the special administrative regions have made at least one appearance so far this month.
Macau’s Chief Executive Ho Iat Seng held a press conference on February 4 to announce the unprecedented 15-day closure of Macau’s casinos and reply to the media’s questions regarding the coronavirus. In Hong Kong, leader Carrie Lam met the media as recently as February 8 to answer questions. MDT