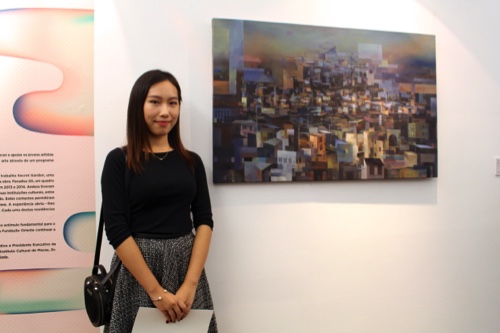 Local artist and curator of the Art for All Society (AFA) Autumn Salon 2014, James Chu, believes that Macau’s art scene has evolved in the recent years, as more young talent emerges. The AFA Autumn Salon, on display at Casa Garden until November 30, features artworks by 21 participating artists. The exhibit includes a painting by this year’s Orient Foundation Art Award recipient.
Lai Sut Weng, 21, received the award on Friday for her oil on canvas, “St Paul’s Ruins”, which was painted this year.
The painting features colorful small squares that come together to resemble St Paul’s Ruins. “For me this is a landmark of Macau, but the way the squares are placed, so tight and close to each other, it’s also about how life is in Macau, where connections between people are very close,” she said.
For Lai, the painting is a reflection of her own Macau experience, the city where she grew up. It’s not only a collection of squares, but also a collection of memories.
The young artist, who is currently studying oil painting at the Macau Polytechnic Institute, sees the Orient Foundation award as an opportunity to seek further inspiration while attending an artistic residency in Portugal. The prize consists of MOP50,000 and a one-month residency in Portugal.
“Portugal and Macau have a long-standing relationship. I hope that during my stay there I will feel inspired and gain a deeper understanding of the country’s culture. So I can create something different from this style and produce more artworks while I’m there,” she said.
Lai  started painting four years ago, and she doesn’t plan to stop any time soon. “Yes, I would like to continue painting.”
SJM’s CEO, Ambrose So, a panel judge for the Orient Foundation Art Award, stressed that it was not an easy choice, since the young artists’ works were all of  a very high standard. “The winner’s artwork makes us feel the complexity of the houses around St Paul’s Ruins. She was meticulous in expressing this complex atmosphere. The color and tone are impressive.”
James Chu, curator of the AFA Autumn Salon, shared a similar opinion: “You can tell that, in terms of skills and concept, the appearance of the artwork is excellent.”
He believes that a bright future in the art sector awaits Lai. The residency in Portugal, he said, is a perfect opportunity for her to develop her work and further her artistic career.
James Chu was particularly happy that the award was granted to such a young artist this time.
With the Autumn Salon in its fifth edition, James Chu recalled how the art scene has evolved in Macau, especially now that there are more young artists interested in showing their work. “The quality of their work, and the concept behind the artwork… you can tell that young artists have developed quite a lot in the recent years,” he assured.
As the Macau art market is still relatively small compared to other neighboring regions, James Chu stressed that in the past few years, more young artists have emerged on the city’s art scene. “They might not be that well-known, but you can see that their work is good and worth exhibiting here,” he added.
In terms of content, James Chu notices that young artists in Macau tend to express their personal feelings through art, rather than expressing political views like artists in Hong Kong or Taiwan.
The exhibition features works by over 20 artists, including Mina Ao, Ao Ieong Weng Fong, Cai Guo Jie, Peggy Chan, João Jorge Magalhães, Lai Sio Kit, Peng Yun, Francisco Ricarte, Carolina Neves Rodrigues, Coke Wong, Claudia Wu, Wong Kei Cheong, Fan In Kuan, among others.

SJM’s CEO, Ambrose So, recognizes that the Chinese Communist Party’s anti-corruption campaign has impacted on Macau’s gaming sector, as the total casino revenue fell by 23.2 percent this month. On the sidelines of an award ceremony held on Friday, Mr So said that the anti-graft campaign launched by the Chinese government has affected Macau’s gaming landscape for a period of time, especially for the VIP segment.
Ambrose So believes that in the second half of next year, there will be “a good rebound” of the total casino revenue.