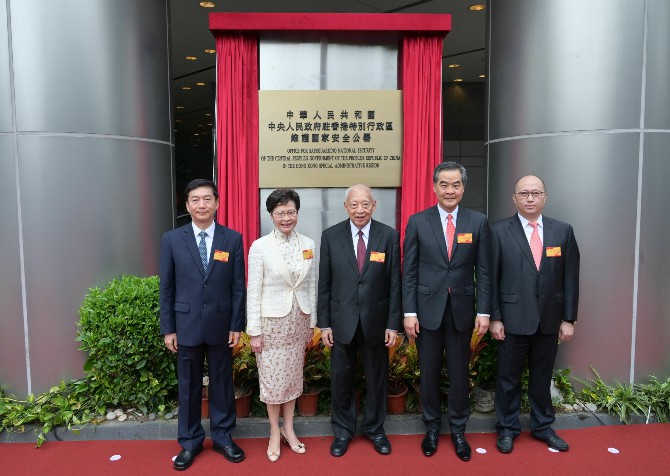 Artist. Propagandist. Urban planning enthusiast. Traditional Chinese medicine student. Zheng Yanxiong doesn’t fit the usual mold of a top Communist Party security agent.
Zheng’s eclectic background suggests someone who will bring a broad approach to running the Office for Safeguarding National Security in Hong Kong, the powerful and secretive agency China created to implement a new security law in the former British colony. The office will “oversee and provide guidance” to Hong Kong authorities and be accountable to Chinese President Xi Jinping’s government.
The law gives Zheng, 57, broad authority to gather intelligence, select some “complex” cases for prosecution in mainland courts and regulate foreign media outlets. That could become more important as American journalists in Hong Kong become potential targets for retaliation and tensions between the U.S. and China escalate.
Zheng has played the role of enforcer on the global stage before, helping to quiet a famous 2011 uprising against local Communist Party leaders in the fishing village of Wukan, 150 kilometers (90 miles) up the coast. During that episode, he demonstrated a distaste for the foreign media commonly expressed by party officials.
“If the foreign media could be trusted, then sows could climb trees,” Zheng said at the time, though he also pointed out that some foreign media outlets were objective and could help bring authorities’ attention to unknown issues.
The law makes Zheng one of Hong Kong’s most important officials alongside Carrie Lam, the city’s Beijing-appointed chief executive; and Luo Huining, the head of China’s Liaison Office. Already authorities have used its prohibitions against secessionism and collusion with foreign powers to bar a dozen democracy activists candidates from seeking office and arrest four students over internet posts allegedly calling for a “Republic of Hong Kong.”
The decision to arrest activists over internet posts — rather than waiting for them to act on their views — points to a more preventative approach to identifying and monitoring perceived troublemakers and then using the law to pressure them. It’s the sort of strategy Zheng mused about in a 2014 book after studying urban planning in Australia.
“What if we could manage the transparency?” Zheng wrote. “When specialized agencies are equipped with the most advanced technologies, and have a thorough grasp of online information and public opinions, as well as a clear understanding of criminals’ each and every move, will we still be so passive?”
The law gives authorities the power to proactively quash pockets of dissent similar to their peers on the mainland, where surveillance, censorship and extrajudicial detentions make it much harder for any opposition to organize. Authorities have already moved to ban political activity in schools and gain a tighter grip over what’s being taught to the next generation.
“China’s model of social governance and social management has been very focused on prevention of conflict and unrest,” said Sheena Greitens, an associate professor and expert in authoritarian politics at the University of Texas at Austin’s Lyndon B. Johnson School of Public Affairs. “It’s likely that Beijing is hoping that the office in Hong Kong will shift officials there toward using some of the more preventive approaches we’ve seen deployed in mainland China.”
Chinese officials acknowledged their goal was to preempt acts of subversion and secession after handing down the legislation that created Zheng’s office. “Once the offense is accomplished, the nation is already split or the state is already subverted — how can you still apply the law?” Shen Chunyao, the head of the National People’s Congress legislative affairs commission, asked a news conference last month.

Secretive office
The details of Zheng’s strategy will likely remain a secret, with Lam telling reporters on July 7 that a news release on the national security commission’s first meeting would be the last of its kind — the meetings were too sensitive. The Hong Kong and Macau Affairs Office in Beijing didn’t reply to request for an interview with Zheng and calls to the office went unanswered.
Attempts to contact Zheng at the Metropark Hotel in Hong Kong’s Tin Hau neighborhood — where his agency set up a temporary office overlooking the frequent protest gathering spot of Victoria Park — were unsuccessful. Two armed immigration officers refused to provide information on how to contact the office, and the four additional plainclothes security personnel doubled to eight when approached by a reporter.
“We will not encroach on any person or organization’s legal rights,” Zheng pledged in a July 8 speech marking the office’s opening. He vowed to strengthen coordination with other mainland entities in Hong Kong including the Liaison Office and the People’s Liberation Army, whose local garrison is reported to have about 6,000 personnel.
“This is a very prominent role, but at the same time it’s a role where he will have to answer to some very senior people,” said Dali Yang, professor of political science focusing on China at the University of Chicago. “He proved his tough side in Wukan, and he has many other characteristics such as his Cantonese and the party background which make him fit for the role.”
Raised in a poor village in the southeastern Chinese city of Shantou, Zheng is familiar with Cantonese, which is spoken in Hong Kong and much of Guangdong province. He was accepted at 16 to study at the Guangzhou University of Chinese Medicine.
He cycled through various political jobs, including a stint at the South China bureau of the Communist Party’s People’s Daily newspaper. Along the way, he refined an interest in Chinese art and literature, publishing dozens of essays on calligraphy, painting and film, sometimes under the pen name Zheng Jingshan.
Zheng had two portraits featured at a Guangzhou art exhibition in 2016: Zheng Zhengqiu, a founding father of Chinese cinema; and Lu Xun, an early 20th century writer dubbed by late party patriarch Mao Zedong as “the saint of modern China.”
Tian Feilong, an associate law professor at Beihang University in Beijing, said Zheng Yanxiong’s background could help him build a positive image of the office. “There is a need to alleviate Hong Kong people’s fear for the office and for the national security law,” Tian said.

Wukan uprising
Zheng’s proved himself to be a reliable hardliner after being appointed to lead the Shanwei city party committee, which oversees Wukan. There, he oversaw a crackdown on groups of locals who had organized themselves to fight the sale of village land.
Residents were detained, including one who later died in custody, sparking a confrontation between villagers and local police that drew global media attention. The provincial government then intervened and allowed a landmark election.
In a speech, Zheng said the protesters’ methods were “unreasonable and the process was out of control,” even though he acknowledged that their demands were “mostly reasonable.” He accused villagers of unnecessarily escalating the dispute and giving the foreign media “artillery” to attack China and the ruling party.
After the global attention on Wukan faded, the village’s new elected leaders struggled to convince more senior officials to return the land and were eventually detained. Zheng, meanwhile, was promoted to run the day-to-day operations of Guangdong’s party committee, the most powerful body in the country’s most-populous province.
“He is loyal and he does what the top asked to be done without hesitation and without mercy, which seems a very good qualification for the job,” said Steve Tsang, director of SOAS University of London’s China Institute. “The intention is to make sure that the people in Hong Kong would be so sufficiently terrified that they’re not going to even think about resisting.” Bloomberg