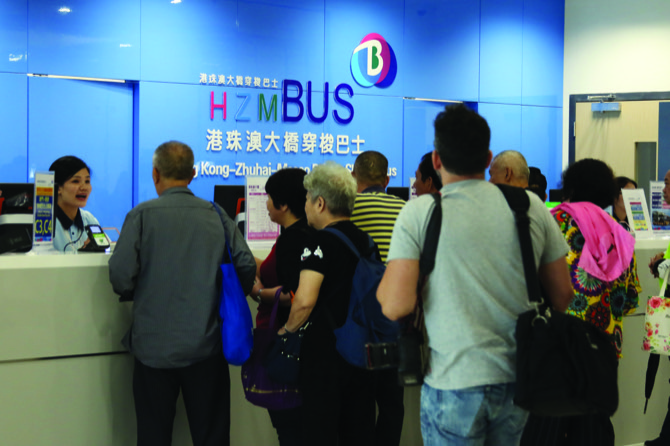 The Guangzhou Municipal Administration of Tourism has requested that mainland travel agencies “reasonably arrange one-day tours to Hong-Kong and Macau through the Hong Kong-Zhuhai-Macau Bridge (HKZMB).”

The Guangzhou tourism authority pointed out that “due to the big increase in the number of passengers recently visiting the HKZMB, irregularities appeared frequently.”

In addition, the Guangzhou authority claimed that, in order to “strictly implement” the mainland’s tourism law, it requires travel agencies which are not qualified for overseas tourism not to operate overseas tourism businesses.

On Wednesday, Macau and Guangdong reached an agreement to ease restrictions for Macau’s private cars, as well as for Guangdong and Macau’s official cars which also use the bridge.

Regarding this specific restriction removal, the agreement states that both kinds of cars will have a longer temporary permit of bridge utilization between Macau and Zhuhai, which means these vehicles will not need to apply for a new card each time they cross the bridge (either through Zhuhai or Macau).

In addition, the Transport Bureau (DSAT) announced yesterday that, until November 23, the HKZMB Macau port had recorded a total of 802,804 crossings, of which more than 100,000 were recorded across the Zhuhai-Macau border, 680,000 across the Macau-Hong Kong border, and 16,000 across vehicle channels.

Around 15,000 trips of shuttle buses between Hong Kong and Macau were recorded, involving a total of 600,000 passengers.

There were 3,000 cross-border bus services between Hong Kong and Macau provided, which transported more than 80,000 passengers between the two places.

Despite the fact that the bridge has been used by such a large number of passengers, ferry operator Shun Tak Group is not worried about the ferry business.

Shun Tak Group recently said that the company is still waiting to see the impact caused by the bridge’s opening, and that, so far, everything is in line with the company’s expectations.

The CEO of Shun Tak Group, Pansy Ho, noted that there is no fierce competition between buses and the ferries.

The company is also said to have not reduced ferry operations due to the bridge.  JZ