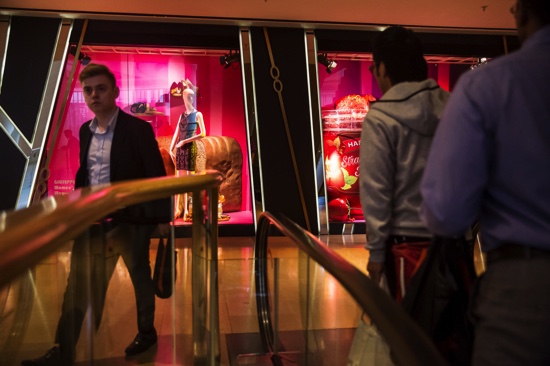 After 27 years of serving rib-eye steak and apple pie to American cuisine lovers in Hong Kong, Dan Ryan’s Chicago Grill has closed its doors at the city’s Pacific Place mall. Taking its place: a trendy new Italian restaurant called Operetta.
“I don’t know why they had to leave,” said Ho Kwan-lun, a urologist who took selfies with his friends in front of Dan Ryan’s before going in for one last meal the day it closed on April 10. “It’s a shame. This place has been here so long.”
Landlord Swire Properties Ltd.’s decision not to renew Dan Ryan’s lease wasn’t about squeezing more rent from a new tenant. Instead, it’s an attempt to refresh its tenant mix to woo new visitors in response to Hong Kong’s deepest retail sales slump since 2003, when the outbreak of Severe Acute Respiratory Syndrome disease emptied malls.
The million-dollar question for landlords: How to keep mall traffic flowing when wealthy mainland shoppers have turned lukewarm toward Hong Kong and the local economy is slowing in tandem with China’s? Developers are searching for the answer by bringing in new tenants offering free yoga classes, champagne and caviar pop-up bars, and gelato.
“Our high-end retailers have been facing challenges in recent months,” said Fiona Shiu, general manager of Pacific Place. “Customer spending patterns have changed, and we are constantly revisiting the trade mix.”
It’s a scenario playing out at luxury malls around Hong Kong, where double-digit rent increases were the norm during a decade when sales were powered by hordes of mainland Chinese shoppers loading up on Louis Vuitton handbags and Dior jewelry. With those tourists taking their spending to Paris, London and Tokyo, and with online competition gaining ground, mall owners are staring at steep rental declines.
“The biggest challenge for shopping malls is to keep them occupied,” said Eva Lee, a UBS Group AG property analyst. “A lot of rentals were signed when the market was still great, and they have not adjusted to the new reality of weaker retail sales.”
Lee expects rents in prime locations to fall as much as 25 percent in the next two years.
Falling rents are only half the equation for developers. Because most leases entitle the landlord to a share of retail receipts, when sales are weaker for tenants, the malls earn less, too.
The locations that were the biggest beneficiaries of the Chinese boom are now suffering the most. Arrivals of Chinese tourists fell 18 percent during the first two months of 2016 compared with the same period last year, according to Hong Kong government data, while their retail spending fell 8.3 percent in 2015, after nearly a decade of double-digit growth.
Take Wharf Holdings Ltd.’s mammoth Harbour City mall complex in Kowloon, which in 2014 boasted the highest sales per square foot in the world and accounted for about 7.1 percent of all retail sales in Hong Kong that year. In 2015, Harbour City sales slumped 12 percent.
The average retailer occupancy cost ratio at Harbour City jumped to its highest level in 16 years in 2015, according to data from Bloomberg Intelligence. Rents there could fall by as much as 40 percent in the next five years, says UBS’s Lee.
“In the past 10 years, most shopping centers were driven by mainland shopper requirements for gold, jewelry, luxury labels and cosmetics,” said Helen Mak, senior director of retail services for Hong Kong at Knight Frank LLP. “It’s probably the end of that chapter.”
The new chapter is about bringing back local shoppers. At Hongkong Land Holdings Ltd.’s upscale Landmark mall in Central, cashmere sweater maker Pringle of Scotland has moved out and Mak Mak, a Thai restaurant, has moved in. Lululemon Athletica Inc. has opened a flagship store at Hysan Place mall in Causeway Bay, where it holds free weekly yoga classes on Sunday mornings.
At Harbour City, Wharf Holdings hosts a new Eslite bookstore and bakery, one of more than 40 new concept stores introduced since 2015, the landlord said in an e-mail. Its Times Square mall has introduced a floor dedicated to kids’ shops.
At Pacific Place mall, Tea WG Salon & Boutique now occupies Coach Inc.’s old space. Pop-up champagne and caviar bars as well as gelato kiosks now populate the landings between escalators. Swire Properties plans to increase food and beverage outlets by 50 percent in the next two years. Whether that’s the right formula remains to be seen.
“If you take a luxury shop and make it into a tapas bar, base rents are generally lower,” says Sebastian Skiff, executive director of retail development and asset management for Asia at Colliers International Group Inc. “You still need higher rent retailers to support that foot traffic.”
Meantime, other Dan Ryan’s outlets in Taipei and Singapore, as well as in the Harbour City and Festival Walk malls in Hong Kong, are set to keep serving up American-size portions – for now, at least. Frederik Balfour, Bloomberg