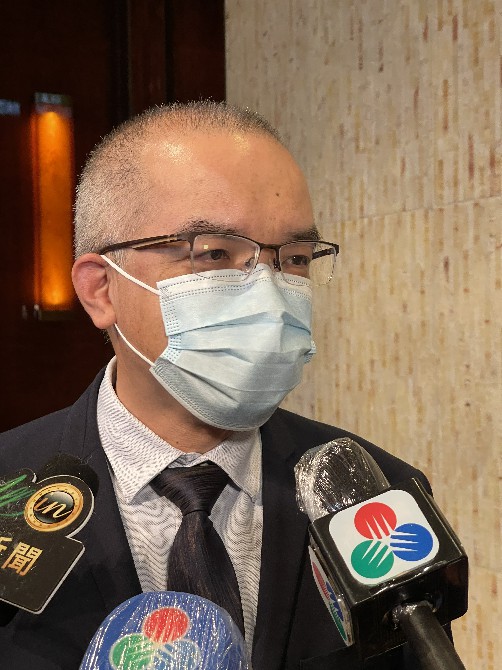 Dr. Samuel Tong, president of the Macau Institute of Management

Following the last economic trough in the second quarter of 2020, the economic outlook for this year should be cautiously optimistic, Dr. Samuel Tong, president of the Macau Institute of Management, said yesterday.
On the sidelines of an event celebrating young entrepreneurship, Tong revealed his forecast for the city’s economic performance this year.
He cited several factors, namely the fluctuating conditions of the Covid-19 pandemic in the region, as well as the effectiveness and popularity of the Covid-19 vaccine, to support his view. “Our arch pillar of the tourism and service industry is highly reliant on the improvement of the pandemic,” Tong explained.
On the other hand, investments have been flat since the large casinos are gradually concluding their investments. “Let’s stay tuned to see if there will be potential regional cooperative projects after the ‘Two Meetings’,” Tong remarked.
“Two Meetings” is a term used to refer to the annual sessions of the two political bodies of the People’s Republic of China, namely the National People’s Congress and the Chinese People’s Political Consultative Conference.
In addition, he forecasts that local consumption will not drop drastically unless the unemployment rate falls further. Nonetheless, he reminds the city to be vigilant about further business closures.
Meanwhile, Tong said that the upcoming Lunar New Year will be a key indicator for the path of the city’s economic recovery.
The speed of the recovery will largely depend on several factors, including the Covid-19 situation in mainland China and Hong Kong, and how big of a positive impact the Macau-Henqin collaboration scheme and Greater Bay Area (GBA) development will have on investment projects in Macau.
The academic also stated that if the unemployment rate of local residents is maintained at 3 to 4%, it would not have an adverse effect on local consumption. However, society should keep an eye out for a possible wave of business shutdowns in the future, he pointed out.
There have been no new investment projects in the city lately. The market is anticipating that the development of the Macau-Henqin collaboration and GBA will foster new investments in Macau and drive the city’s economy. Liu Benli, the chairperson of the Macau Economic Association, projects that the city’s economy will recover slowly in the first quarter of this year. However, he said small and medium-sized enterprises (SMEs) and the tourism industry are still under heavy pressure and suggested the government to roll out support measures to save SMEs from shutting down. Anthony Lam, Honey Tsang