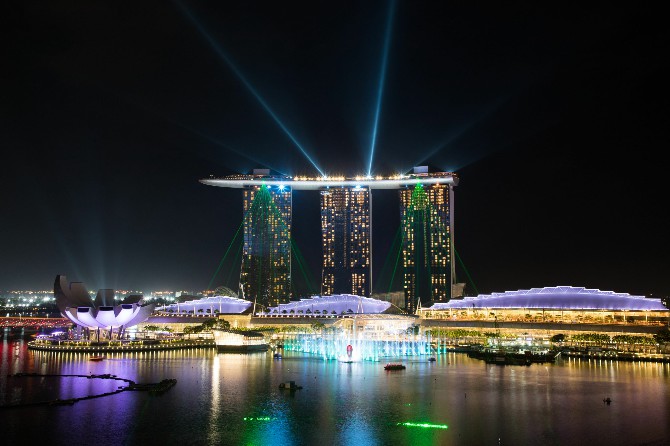 Las Vegas Sands Corp.’s Singapore casino has hired a law firm to conduct a new investigation into employee transfers of more than $1 billion in gamblers’ money to third parties, according to people familiar with the matter.
Davinder Singh Chambers LLC, which specializes in dispute resolution and international arbitration, was appointed after Singapore police began a probe of third-party transfers at Marina Bay Sands Ltd., said the people, who asked not to be identified discussing private matters.
The review by one of Singapore’s best-known law firms adds to scrutiny of the casino by the U.S. Department of Justice and Singapore authorities after a patron sued the firm last year alleging that SGD9.1 million ($6.7 million) of his money was transferred to other gamblers without his knowledge. The lawsuit was settled out of court in June, with the casino agreeing to reimburse the full amount. There was a “non-admission” of liability from both sides.
Marina Bay Sands said in a statement that when issues regarding the handling of client transfers were raised, the company thoroughly reviewed the matter and concluded that no patron funds were transferred in a manner that was contrary to the client’s intent.
“MBS continues to work closely with its regulators to monitor MBS’s compliance with all legal obligations,” the casino said. Singapore’s Casino Regulatory Authority said it has completed investigations into allegations that Marina Bay Sands carried out unauthorized transfers from accounts of former Chinese patron Wang Xi.
In a response to a Bloomberg News inquiry, the CRA said it concluded the casino didn’t breach requirements in that case – including those relating to anti-money laundering – though “there were weaknesses in MBS’ casino control measures pertaining to fund transfers,” it said in a statement, referring to the complaint by Wang.
Las Vegas Sands dropped 4.2% in New York, after earlier plunging as much as 8.9%, the most since March. The shares were down 25% this year as of Wednesday’s close.
A representative for Davinder Singh Chambers declined to comment. The Singapore police force said it’s inappropriate to comment as investigations are ongoing.
The client lawsuit sparked scrutiny by a slew of authorities into how Marina Bay Sands handled and monitored third-party transfers. The transactions, when authorized, are legal and used by groups of wealthy gamblers in Asia to pool winnings and losses at different casinos.
The transfers are sometimes made through so-called junket operators, which provide transportation, hotels and credit to high rollers. In Macau, the junkets allow Chinese gamblers to get around strict capital controls by pledging assets on the mainland in exchange for credit at casinos.
While the junkets are generally more strictly controlled in Singapore, an earlier probe by Marina Bay Sands and the Hogan Lovells law firm found instances of employees not complying with proper standards by filling in payment details on pre-signed or photo-copied authorization forms, according to the people. It also uncovered cases in which original documents were destroyed, the people said.
During the Hogan Lovells review covering 2013-2017, more than 3,000 letters of authorization were used to endorse transfers of funds from patrons to third parties worth about SGD1.4 billion, according to the people.
Las Vegas Sands’ Singapore unit, among the most profitable in billionaire Sheldon Adelson’s gaming empire, called on Hogan Lovells’ team that specializes in corporate investigations and contentious regulatory matters after the Casino Regulatory Authority started its probe following the 2019 lawsuit from patron Wang Xi.
The U.S. Attorney’s Office meanwhile interviewed a former compliance chief of Marina Bay Sands in July as part of the justice department’s probe into whether anti-money laundering procedures had been breached in handling high rollers, people familiar with the matter said.
Of the transactions scrutinized in the Hogan Lovells review, letters authorizing transfers worth SGD365 million from multiple patrons bore signatures that appeared to be similar, facilitating numerous transfers, one of the people said. One group of employees was involved in SGD763 million in transfers. That concentration in just a handful of staff failed to draw the requisite attention, according to the person.
The regulator “takes a serious view of such matters and had directed MBS to strengthen its control measures, which MBS has since undertaken,” according to the statement. “CRA will continue to exercise close oversight to ensure that MBS’ measures are effective.”
Marina Bay Sands told the regulator that it had strengthened its control process in April 2018 to ensure that gamblers authorize each fund transfer, and that the requests are approved by the casino’s compliance department, the person said. Employees also receive training to spot and report suspicious behavior and any unlicensed junket-related activities.
Davinder Singh is well known for representing Singapore Prime Minister Lee Hsien Loong in a number of defamation cases, as well many other high-profile lawsuits over banking, debt restructuring and frauds. Hogan Lovells is known for its investigations and anti-corruption work.
Las Vegas Sands’ Asian operations, which also include Macau, contributed about 85% of the company’s $13.7 billion in revenue last year, and have helped make Adelson one of the richest men in the U.S. MDT/Bloomberg