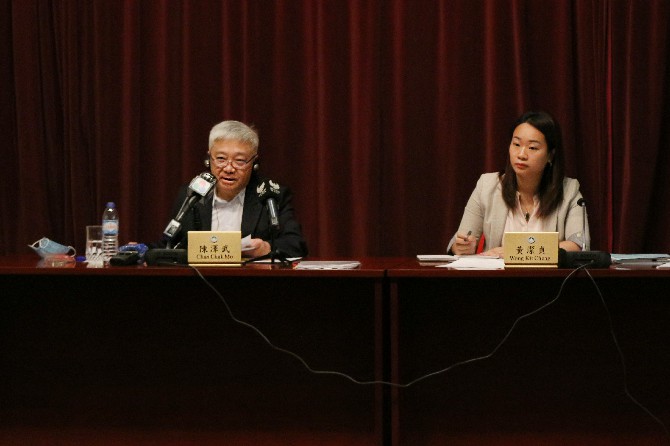 The members of the Legislative Assembly’s (AL) Second Standing Committee have expressed concerns to the government about the license ownership of establishments and the termination of rights to such licensing.
According to the chairman of the Committee, lawmaker Chan Chak Mo, several issues can influence both the continuation of business operations as well as the rights of shop owners, which should be addressed by the government at this time, he said during a media briefing following yesterday’s committee meeting.
Chan noted that there are long-term problems that have been identified by the industry and that the government has not yet managed to tackle adequately. Among them is the so-called “scammer tenants” issue directly related to the ownership of the establishment’s licensing.
According to Chan, what happens is that when establishments located outside the hotel premises close or cease operations, their operation license continues to be valid and, since the ownership rights belong to the applicant, the landlords of the shops in which they had been operating will not be able to rent the space out to other businesses to start operations unless the previous tenant cancels the license by his or her own initiative.
“Out of hotels, the cases are very frequent, [forcing] the shop owner to negotiate with the license owner. They often request compensation [to cancel the license],” Chan said. “There are some people that even renew the license [of the establishment] to stop the landlords to continue to rent the shop to another person.”
To resolve such a problem, the committee is recommending the introduction of a new rule that allows landlords to request the cancellation of the licenses of former tenants in cases where it is “proven that the tenant has stopped using the shop,” i.e. when the rental contract has been terminated.
Chan noted that in the first version of the law text there was an attempt from the government to establish a procedure in which the landlord could request the cancellation from the Macao Government Tourism Office (MGTO), which would then notify the license holder, giving them 20 days to respond to such a request.
“But in this current version of the law text, the government decided to remove that rule, since the MGTO said that in most cases it is difficult to notify the license holders, especially if they are not from Macau or are not based in Macau,” Chan said, adding that in reply to the committee, the government promised to evaluate this matter and find a resolution to the situation.
“Probably this will be included in the new law text version that the government will present after the legislative holidays,” he said.
The committee also questioned the government as to what would happen in other circumstances, for example the transfer of the commercial rights of an establishment to another person, in case of death of the license holder or closure of the company.
Chan said the government had responded by saying that in cases where a license holder is a person and there are legal successors who wish to continue the business, the license could be transferred to them. Regarding the cases in which the establishment is operated by a company, the government did not have an immediate response and told the committee that they will conduct an evaluation and communicate the solution at a later stage.
Yesterday’s meeting marked the last meeting of the committee on this topic before the legislative holidays, and according to Chan there will now be a period in which the law text will be in the hands of the legal advisors of both the AL and the government to discuss some “technical issues.”
“Our goal is still to be able to conclude this law this year. But it will depend also on other factors. We know that we usually have the Policy Address in November [which can delay the plenary voting scheduling] but we hope we still can conclude this law this year,” said Chan.