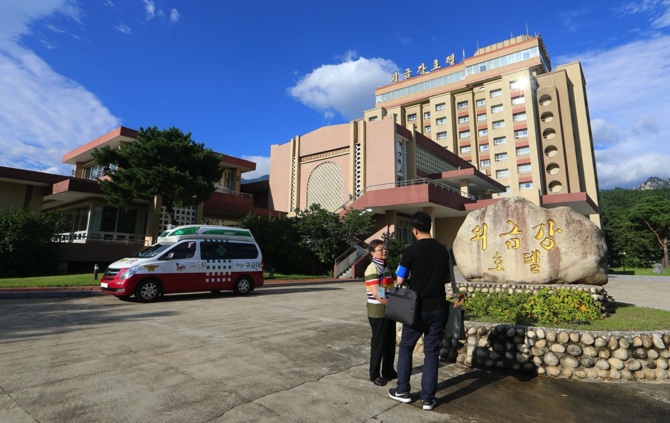 The Mount Kumgang resort, a venue for separated family reunion

Kim Jong Un has threatened to tear down South Korean-built structures at a North Korean mountain resort, delivering a blow to South Korean President Moon Jae-in’s plans to bring back the now-frozen project once seen as a symbol of reconciliation.

The North Korean leader toured the Mt. Kumgang resort, built by an affiliate of South Korea’s Hyundai group and shuttered for more than a decade, saying the facilities “were built like makeshift tents in a disaster-stricken area or isolation wards,” the state’s official Korean Central News Agency on Wednesday reported him as saying.

“He instructed to remove all the unpleasant-looking facilities of the South side with an agreement with the relevant unit of the South side,” KCNA said adding Kim “made a sharp criticism of the very wrong, dependent policy of the predecessors who were going to rely on others when the country was not strong enough.”

Kim indicated he is open to South Koreans coming back to Kumgang, but on his terms. Moon has pressed for reviving Mt. Kumgang and a joint industrial park with North Korea that have been closed due to political tensions and Pyongyang’s testing of nuclear devices and ballistic missiles in violation of United Nations resolutions.

“He is serious about tearing down the existing South Korean-built facilities and build new ones,” said Rachel Minyoung Lee, a specialist on North Korea at Seoul-based NK Pro, adding the report suggested “North Korea may be leaving the door open for South Korea to keep its finger in the pie in some form.”

South Korea’s Unification Ministry said it was looking into the report. “If North Korea makes a request, our government is ready to engage in talks regarding the protection of our people’s property rights, the spirit of the agreement between North and South Korea, and the resumption of tourism in Mt. Kumgang,” it said in a statement.

In a speech Tuesday to South Korea’s National Assembly, Moon said the Korean Peninsula is facing its last hurdle before a permanent peace and called on Kim to respond to South Korea’s proposal to build “peace economy” with expanded economic, cultural and social exchanges. North Korea has largely ignored Moon’s calls over the past several months for talks.

“We are confused at such abrupt reports when we are at the point of resuming tourism, but we plan on responding patiently,” the company said in a statement in response to the KCNA report. South Korea has given no indication that a resumption of tourism was imminent.

The news from North Korea sent shares of affiliated firms such as Hyundai Elevator Co. and Hyundai Rotem Co. lower in early trading in Seoul.

Mt. Kumgang was once a source of foreign currency for cash-starved North Korea with each tourist having to pay a fee to enter North Korea and Pyongyang taking a cut on all the money they spent on food, lodging and tours. The U.S. had raised worries that North Korea used funds from Mt. Kumgang to help pay for its weapons programs.

The resort on North Korea’s east coast opened in 1998 as a symbol of cooperation between the two countries technically still at war. It included hotels, restaurants, shopping arcades and a performance hall with the then modern facilities standing out from slipshod North Korean-built structures in the area.

In 2008, South Koreans were ordered to vacate the resort after a 53-year-old woman vacationer who wandered close to a North Korean military facility in the area was shot and killed. More than 2 million South Koreans had visited the scenic mountain site located on clear blue waters before it closed.

The resort was largely staffed with ethnic Koreans who had been living in China, which minimized interaction between North and South Koreans. Jon Herskovitz & Jihye Lee, Bloomberg