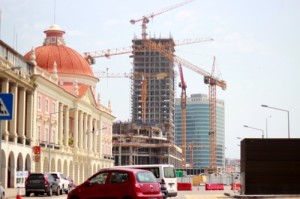 The Angolan government has hired two Angolan banks to set up a financial operation to raise USD2 billion to fund the National Reconstruction Programme, according to a statement from the Finance Ministry.
The statement issued Tuesday said that the government hired Banco Angolano de Investimentos (BAI) and Banco de Fomento Angola (BFA) as “financial consultants” to “structure, set up and intermediate” this financial operation.
Some of the funds will be raised in Angolan currency (kwanzas) to the value of US$1.5 billion, in the form of a “short term loan in that amount, which when it matures in June 2015, will be converted into Treasury Bonds issued specifically for this purpose.”
The second component of the operation is a contract worth US$500 million to be raised in US dollars.
In order to provide the kwanza denominated loan the two banks, which subscribed two thirds of the operation, will head up a banking syndicate that also includes – for the remaining funding – BIC (14.4 percent), Banco Totta e Açores (7.17 percent), Banco Espírito Santo Angola (4.8 percent), Millennium Angola (3.83 percent), Banco Privado Atlântico (2.4 percent) and Banco Comercial Angolano (0.73 percent).
By contracting these loans “at higher rates of interest” than those that “could be found on the international market,” the Finance Ministry noted, “the National Treasury is contributing to the creation of local financial instruments,” using Angolan savings. MDT/Macauhub

Angola is the third largest sub-Saharan financial market, with assets of US$70 billion, behind Nigeria and South Africa, Angola’s Economy Minister Abraão Gourgel said Tuesday in Luanda. The minister, who was speaking at the opening ceremony of the 31st edition of the Luanda International Fair (Filda), noted that Angola posted yearly growth of around 3 percent and had a growing middle class, as well as a rise in use of financial services and rise in consumer demand in general.