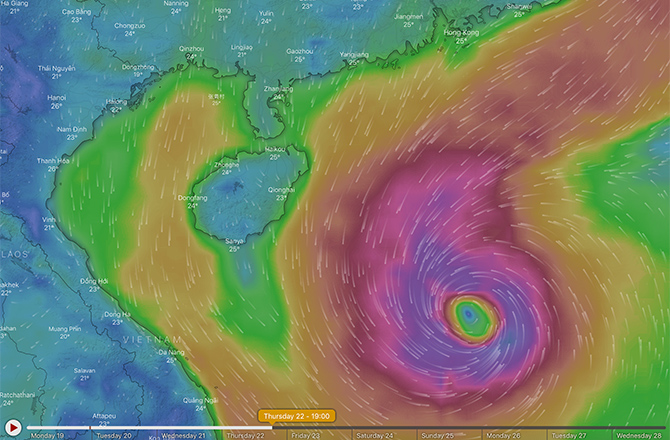 Windy.com forecast for Thursday at 7:00 p.m.

A tropical depression currently developing to the east of the Philippines will enter the South China Sea in the next few days and intensify later in the week, according to Macau’s Meteorological and Geophysical Bureau (SMG).
According to weather forecasting company Windy, the depression could develop into a typhoon somewhere between the late hours of Wednesday and the early hours of Thursday.
With a forecasted route to pass just south of Sanya on the island of Hainan early on Saturday, the tropical storm is likely to affect Macau the most during the second half of the week.
Despite predicting that the intensity of the depression will increase, the SMG notes that both the “path and intensity are still uncertain at this moment,” calling on the public to pay attention to the change in weather.
The SMG also said that Macau will continue to be under the monsoon effect from the northeast, causing the weather to be “windy and slightly cool in the latter part of this week.”
Further updates on the development of the tropical depression will come in due course.
This will be the second time this month that Macau will be affected by a tropical storm. Early last week, Macau was under the influence of Tropical Storm Nangka. Local authorities decided to hoist the Typhoon Signal No.8 for nearly 12 hours last Tuesday as Nangka moved westward through the South China Sea before making landfall in Hainan.
Aside from heavy rain and some light damage caused to outdoor structures, there were no instances of significant damage or severe injuries to report.
Nangka was the first severe storm to hit Macau after the promulgation of the new Civil Protection Law on September 15.