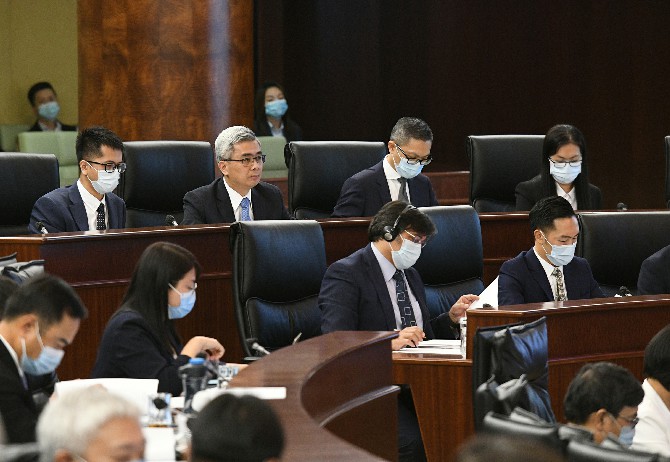 During Friday’s Legislative Assembly (AL) plenary meeting, an amendment to law No. 17/2009 “Prohibition of Unlawful Production, Trafficking and Consuming of Narcotic Drugs and Psychotropic Substances” was passed by lawmakers.
During his introduction, Secretary for Security, Wong Sio Chak, stated that in order to fulfill the obligations of international conventions, align Macau’s controlled substances legislation with neighboring regions, and improve the effectiveness of the fight against drug crimes, 12 new internationally controlled substances have been added to the prohibited drug list. Two of the substances are already regulated by the existing anti-drug laws. The remaining 10 substances are currently not included in the list of prohibited drugs.
The AL accepted the Chief Executive’s suggestion to use emergency procedures for deliberation over the law, meaning that the law was urgently needed. The majority of the lawmakers agreed to pass the urgent procedures for deliberation.
Lawmaker Agnes Lam said that, in the first half of this year, the trend of drug abuse among Macau residents has increased, and the consumption of drugs at home has become more serious. She asked if the 10 new types of drugs have been used in Macau.
Wong pointed out that, in the amendment bill, two of the prohibited drugs are already controlled by the existing laws. In addition, according to the information from the Macao Economic Bureau, there are no related records of importation, consumption, and illegal trafficking of the other 10 new drugs in the Macau market.
Wong said that the 12 drugs were added to the regulation based on legal provisions and international obligations.
In addition, lawmakers also generally passed the amendment of the Unitary Police Service law on Friday. The amendment involves the change in function and reorganization of the police department.
Lawmaker Sulu Sou pointed out at the meeting that the previous and the current governments have completely different opinions about whether to establish a civil defense department after the civil protection law amendment was passed.
After the occurrence of typhoon Hato, in August 2017, the then-Chief Executive believed that the civil protection system was not suitable for the needs of the similar situation.
However, according to Wong, the current government will no longer set up a civil protection bureau.
Wong also pointed out that after the additional civil protection function is added to the Unitary Police Service, the bureau will slightly increase its manpower, and that the security force will try to draw manpower from other police departments of the security force.
At present, there are more than 50 people in the Unitary Police Service responsible for civil defense work. As the work progresses, more staff will be deployed to develop it.