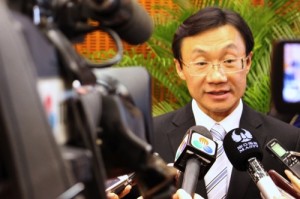 The 8th Ministerial meeting of APEC (Asia-Pacific Economic Cooperation) tourism is an excellent opportunity to promote Macau’s image in the world and one of the most important events marking the 15th anniversary of the Macau Special Administrative Region (MSAR), said Alexis Tam Chon Weng .
Chief of the Office of the Chief Executive, government spokesman and general secretary of the committee preparing the event, due to be held on 13 September in Macau, told English-language Macao Magazine that the international visibility of Macau and make the meeting a great success that will be remembered for a long time.
“The government wants to take the opportunity to make participants at the APEC meeting understand the successful implementation of the principle of ‘one–country and two systems’ and the stability and harmony of Macau,” said Tam.
The secretary-general of the organizing committee for the meeting in Macau also said, ““The meeting will generate a momentum to present Macao as a world tourism and leisure center. We also want the representatives of the 21 countries and regions who will be in the territory to appreciate the cultural heritage of Macau where Western and Eastern cultures met many centuries ago,” he said.
“We would like to make friends with other countries and promote Macau at a bigger, international level. This meeting is a great opportunity to achieve these objectives. Hundreds of representatives of the 21 countries and regions of APEC will be in Macau,” he said.
Tam said “it is a great honor for Macau to host this big international event. The choice of Macao reflects the full support of the central government of the People’s Republic of China (PRC) for the Macau government and its trust in the government’s capacity to organize the event.”
APEC is a forum for economic cooperation in the Asia-Pacific region, established in 1989. It currently has 21 member states and three countries with observer status.
With the aim of enhancing exchange and cooperation in tourism in the Asia-Pacific region as well as to promote tourism development in this region, the first ministerial meeting was held in 2000 in Seoul, the capital of South Korea.
The APEC tourism ministerial meeting in Macau will be the first held in China. MDT/Macauhub