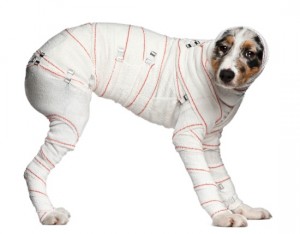 Dog illness symptoms can vary from mild to severe. Many symptoms may mean illness but not an acute emergency. But other symptoms such as loss of consciousness, seizures, difficulty breathing, high or low temperature, as well as several others can be an indication that your dog needs emergency veterinary assistance. If you notice any of the following signs or think you may be observing them, seek veterinary assistance immediately.

1. Loss of Consciousness
A change in consciousness can manifest as sudden collapse, tremors, staggering, sudden withdrawal or lack of responsiveness, coma, convulsions or sudden blindness. A dog may also exhibit a chronic tilting of the head or biting at imaginary objects.

2. Seizures
You can identify a seizure in several ways. The dog’s entire body will likely shake or tremor for several seconds. Then the dog will be unresponsive for a few seconds or up to a minute. You may see the whites of the eyes.

3. Difficulty Breathing
If a dog is struggling to breathe, you may notice it gasping for breath or breathing in a labored manner. You might also notice noisy respiration, and the dog’s tongue may become blue. It may also appear swollen.

4. Change in Temperature
A dog’s temperature should be around 38.6 to 39.2 degrees Celsius. If its temperature goes below 36 or above 40 degrees, something is seriously wrong. You need to take the dog’s temperature if you see it panting, it he feels very cold or if it seems really lethargic.

5. Bleeding
If you cannot stop blood from any area of the dog’s body, apply pressure with a clean piece of fabric and go to the emergency vet. Uncontrolled bleeding can cause loss of consciousness and death.

6. Signs of Acute Pain
If a dog won’t stop whining or yelping, it’s trying to tell you something is wrong. If the usual problem solvers don’t work, seek veterinary attention.

7. Extreme Energy Changes
If a dog becomes extremely lethargic all of a sudden, it’s a sign of a possible serious and systemic problem. Extreme lethargy manifests as a dog who won’t come out of its crate or won’t move a muscle when called or enticed with food or a favourite toy.

8. Symptoms that Do Not Alleviate
The following symptoms should not last for more than 2 to 3 days. These include vomiting, diarrhea, excessive salivation, poor appetite, constipation, wheezing, or dully, dry and flaky hair and skin. Lameness, weakness, and major changes in urination are also symptoms that should change in a few days.

9. Abdominal Bloating
A bloated or abnormally distended abdomen is an acutely serious issue. If your dog seems to be having abdominal pain (i.e. winces or whimpers when touched there), but isn’t vomiting, this is a sign of potential poisoning or an acute kidney problem.

10. Other Times to Call the Vet Immediately
After any accident, fall, or dog fight, a vet should check for trauma, injury, or shock. If you suspect that a dog has ingested poison or any sharp object, don’t wait for symptoms to appear. It’s better to be safe than sorry. by Dr Ruan Du Toit Bester