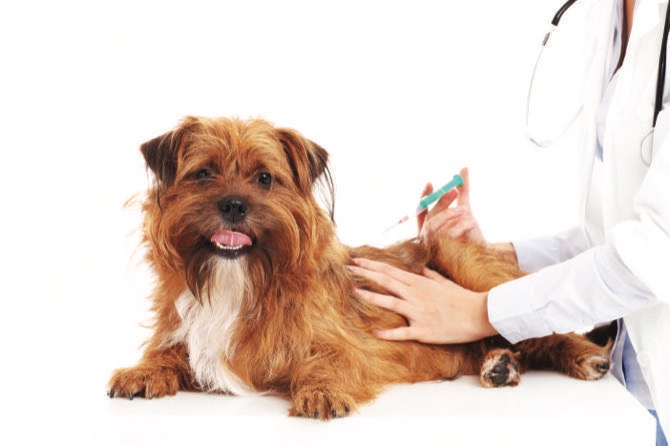 The DHLPP vaccine for dogs is not a compulsory vaccine, but may help your dog and prevent various diseases that commonly affect canines. DHLPP are initials that stand for various canine diseases that may be potentially fatal such as the distemper, the hepatitis, leptospirosis, the parvovirus or the parainfluenza. The first DHLPP vaccine can be administered when the dog is 6 weeks old and several boosters will be given periodically during the following months. Yearly boosters are also needed for the DHLPP vaccine.

The DHLPP vaccine prevents canine distemper, which is an infection caused by viruses. The infection can attack the intestinal tract, the respiratory tract and the central nervous system of the pet. The canine distemper is highly contagious and can be caught through the contact with bodily fluids such as nasal secretions. The virus may also be airborne and contracted in this way; dogs in kennels and animal shelters are more likely to catch the infection.

The canine hepatitis is an infectious disease caused by the adenovirus type 1. The virus can be transmitted through bodily fluids. The disease can be fatal and may manifest through the hepatitis blue eye, which is the formation of a cloudy-bluish pellicle on the surface of the dog’s eye. Vaccination can prevent the contraction of the disease.

Some canines may be allergic to the DHLPP due to the leptospirosis antibodies.

The parvovirus causes a condition that affects the gastrointestinal tract and will affect most often puppies. The virus may be deadly, especially in immunocompromised pets or puppies that don’t have a fully developed immune system. The presence of the virus will cause diarrhea, vomiting and weight loss. The parvo can be transmitted through feces or direct contact with a contaminated area.

Parainfluenza is not a deadly disease, but it may cause a lot of discomfort and is a contagious condition. Parainflueza manifests through dry coughing and breathing problems. The condition will go away without treatment. However, it’s best if vaccines are administered to protect the dog.

The first DHLPP vaccine will be administered when the puppy is six weeks old or later, if the puppy has missed his vaccinations. Booster shots will be administered in the following months. After the first year of vaccines, the dog will only require a yearly booster shot, which will be helpful in preventing the above mentioned diseases in your pet. Some vets recommend administering boosters only once every three years.

The DHLPP vaccine is not 100 percent effective, but will protect most dogs that receive the recommended shots.