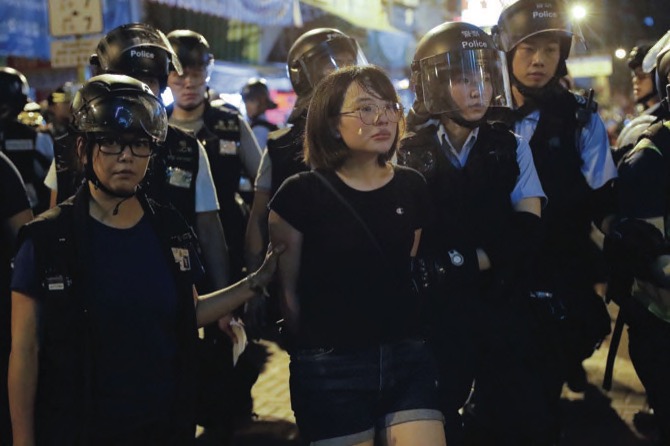 The Chinese authorities acknowledge Hong Kong’s unrest is the worst since they regained the former British colony 22 years ago. Yet they have so far denied a key protester demand that even Beijing sympathizers support.

On Wednesday, the head of China’s top agency overseeing the city rejected an independent inquiry into the unrest, one of the few protester requests with support from business leaders and others who typically back the government. Hong Kong and Macau Affairs Office Director Zhang Xiaoming told a gathering of city representatives that the disturbances must end before any investigation, according to Michael Tien, a pro-establishment Hong Kong lawmaker who was at the event.

“They spent the whole morning stating the central government’s stance: There’s no room for any compromise,” said Tien, adding that he was hopeful Beijing might eventually reconsider. “This is a long battle.”

The response shows how positions have hardened in recent days as some radical protesters focus their attacks on symbols of Chinese sovereignty and opposition figures accuse the government of colluding with stick-wielding mobs. After two months of unrest – including marches of more than 1 million and the ransacking of the city’s legislature – Chief Executive Carrie Lam has refused to satisfy the protesters’ main requests.

While the largely leaderless demonstrators have circulated numerous lists of demands, calls for some kind of independent inquiry feature high on most. The suggestion has been endorsed by pro-Beijing lawmakers, foreign governments and others sympathetic to the establishment, with the American Chamber of Commerce calling for an “internationally credible” investigation.

The protests initially began in opposition to Lam’s legislation that would allow extraditions to mainland China and have since expanded into broad complaints about the Beijing-appointed government. Increasing clashes between demonstrators and police have prompted calls for an investigation into authorities’ use of force, while others want a more general probe of the unrest and its causes.

“People are saying and I’ve said it publicly, we need an independent inquiry,” said Allan Zeman, chairman of Lan Kwai Fong Holdings Ltd. An investigation could help “to settle things down. Because it has morphed into something beyond the bill. The bill is gone. It’s now about unhappiness.”

Although Lam has declared the extradition legislation “dead,” she has refused to formally withdraw the bill, meaning it could be resurrected with little notice. She has said that specific grievances against the police would be reviewed by a complaints council dominated by pro-establishment appointees.

“Some people may not agree with our response, but we have considered every factor involved and come up with the response that we have made,” Lam told a news briefing Monday. The police have denied links to groups of men that have attacked protesters in recent days, calling on all sides to refrain from violence.

Protesters argue government intransigence has helped sustain their movement through nine straight weeks of rallies, marches, sieges and strikes, including a successful citywide effort Monday to disrupt train services and commercial flights. Several strike participants told Bloomberg News they decided to join after Lam’s briefing, in which she vowed a firm police response, without signaling any new concessions.

The Hong Kong government has appointed several “commissions of inquiry” before and after its return to Chinese rule, including an investigation into violent labor disputes in Kowloon in 1966. The remarks by Zhang, China’s top government official overseeing Hong Kong, came during a gathering of city representatives in Shenzhen, in which the lawmaker Tien advocated an inquiry.

Zhang said that such an inquiry was inappropriate while the disturbances were ongoing, but one could be considered after the protests subsided. He described the unrest as the worst the city had experienced since the 1997 handover, an assertion few would question.

“It won’t serve any useful purpose if it’s just to apportion blame or to point the finger at the police,” pro-establishment lawmaker Regina Ip said in an interview in her office on Tuesday, a copy of the 1966 inquiry report sitting on the desk. “And if you want reconciliation, it can’t be done now, when violence is ongoing.”

The refusal to consider an inquiry illustrates Beijing’s determination not to show any weakness against the protesters, some of whom have defaced the national emblem, destroyed flags and chanted pro-independence slogans. Still, supporters counter that an inquiry would help Chinese President Xi Jinping buy time – six months or more.

Some, such as Hong Kong Baptist University President Roland Chin, have suggested a “truth commission” that wouldn’t apportion blame. The investigation might at least help deescalate confrontations between protesters and police, supporters say.

Opposition lawmaker Claudia Mo, who has been a prominent participant in several of the largest protest marches, said she worried it was too late to mount an investigation that was viewed with credibility.

“The effectiveness, if any, would be cut by about half, but I personally hope they would do that,” Mo said. “It could provide an opportunity for a more decent climb down, without a loss of face.” Iain Marlow & Blake Schmidt, Bloomberg

The U.S. government yesterday stepped up its warnings to travelers to Hong Kong because of increasing violence surrounding pro-democracy protests in the Chinese city.

The State Department’s Level 2 travel advisory issued yesterday urges “increased caution in Hong Kong due to civil unrest” and tells travelers to avoid demonstrations and to “exercise caution if unexpectedly in the vicinity of large gatherings or protests.”

The protests, sparked two months ago by proposed extradition legislation, have morphed into calls for broader democratic reforms in the former British colony, along with the resignation of Chief Executive Carrie Lam and investigations into alleged police abuse of force.

The territory’s crucial travel industry has suffered as tourists put off their visits, with Australia, Ireland, Britain, and Japan having also issued travel advisories to their citizens.

Hong Kong police say a total of 589 people have been arrested in the protests since June 9, ranging in age from 13 to 76. They face charges including rioting, which allows for prison terms of up to 10 years.

On several occasions, protesters have also been attacked by unknown persons believed to be linked to organized crime groups, while police took little action to stop them. MDT/AP