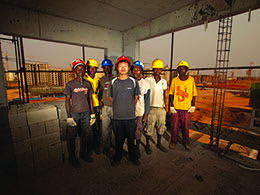 The South Atlantic, where five Portuguese-speaking countries are located, has been a privileged area for key companies China in their efforts at globalization and Angola and Brazil are among the top five destinations for Chinese investment in the last decade, according to a recent study.
In “China’s Risk Map in the South Atlantic,” from the United States’ German Marshall Fund, researcher Jonas Parello-Plesner estimates, based on data from the American Enterprise Institute (aei.org) that Chinese investment in Brazil totaled around USD34 billion between 2005 and 2014, by far the highest level of all countries in the region.
With $13.75 billion, Angola is in 5th place, behind Nigeria ($28.75 billion), Venezuela ($22.11 billion) and Argentina ($14.31 billion) and just ahead of South Africa ($9.55 billion).
The list includes another member of the Community of Portuguese-speaking Countries, Equatorial Guinea, with $2.3 billion, according to the document to which Macauhub had access.
Angola, where the number of Chinese residents was recently estimated at 200,000, is one of the prominent countries in the study, which analyses the political situation of the Countries selected by China for investment and the implications for Chinese security.
Parello-Plesner said the slowdown in the Angolan economy due to the fall in oil prices made “political relations with China and its vital financial support […] even more important” to the African country.
The researcher of Sino-Angolan relations Lucy Corkin estimated the loans granted by China to Angola at $14.5 billion, but other estimates point to values closer to $20 billion, largely backed by oil.
Following recent drops in exports from Sudan, Angola has solidified itself as the largest supplier of oil to China, says the researcher.
At a time when Angola is struggling to finance itself, the credit line from China, used to pay 155 public projects with a total of $5.2 billion, has been a major source for boosting the economy, focusing on the energy and water sector with $2.17 billion for 34 projects.
$1.64 billion will be spent on 33 construction sector projects and $373,300 on 55 education sector projects, according to data recently released by the LCC.
The contracts for many of these works have been published in the Official Gazette in recent weeks, including for water supply networks and and road repairs in the provinces of Bengo, Bié, Huambo, Namibe, Kwanza Norte, Kwanza Sul, Malanje and Uíge, with an overall cost of $550 million.
For example, the China Railway 20 Bureau Group Corporation was contracted to repair the Catchiungo/Chinhama road in Huambo, for $58.4 million and to build a water supply system for the city of Cuito for $39.2 million.
In the last week of May, the Angolan government has awarded 30 public works contracts worth over $1.6 billion to Chinese companies, including the construction of new water supply system in Mucari in the province of Malanje, awarded to China Petroleum Pipeline Bureau for $18 million. MDT/Macauhub