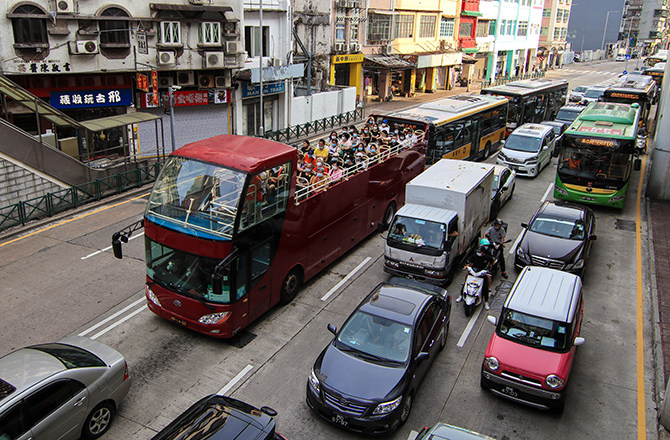 The new public bus service contracts were published yesterday in the government’s Official Gazette. The new contracts for operators Transportes Urbanos de Macau S.A.R.L. and Sociedade de Transportes Colectivos de Macau, S.A.R.L., retain most of the existing conditions from previous contracts and extend the service period for another six years, until December 31, 2026.
Changes to the contracts include new requirements for the operators regarding the new vehicles to be added to the concession.
It is now stated that, from the first day of the new contract on January 1, 2021, “all vehicles to be registered for the first time must be ‘environmentally friendly’ and, except for small buses, must be of low-floor, with only one step at the entrance and exit of vehicles.” The contract adds an exception for vehicles with more than two doors, which may have more than one step at their last rear door.
Of note, the reference to “environmentally friendly” standards is not explained or clarified elsewhere within the contract. It is not clear if it refers to the type of fuel used by the vehicles, pollutant emission standards, or other factors such as the materials used and the percentage of recyclability.
The only reference to this part is where the government defines a progressive system for the inclusion of more buses using “environmentally friendly energies.”
It states that within the first year of the contract, with the exception of small and medium-sized buses, all other buses operating on the routes that do not pass over Governador Nobre de Carvalho Bridge must use “environmentally friendly energies” as fuel in at least 50% of the fleet. That is, they need to be powered by either natural gas, electricity, or a hybrid of the two.
This requirement will then be rolled out to the entire bus fleet (with the same exceptions) by August 1, 2024.
The requirement to replace public buses with a more environmentally friendly fleet does not apply to small and medium-sized buses. As soon as environmentally friendly buses with an identical size to those used in Macau are available in the market, they will be subject to the same requirement while retaining the exception for the routes crossing the Governador Nobre de Carvalho Bridge.
Regarding the fines that operators could face for infringing the rules of the new contracts, some infractions are punishable by a fine of MOP500,000, including cases of traffic accidents resulting in death in which the operator is found to be at fault.
The same fine also applies to the acceptance of electronic payment systems not approved by the MSAR, and the running of routes not attributed to the concessionaire.
Fines of MOP100,000 can also be issued for charging a different fare from the fare authorized by the government, performing any actions without prior authorization, and not complying with the minimum number of operational vehicles in the fleet. The minimum has now been set to 490 vehicles and a fine of MOP100,000 can be issued for each vehicle falling short of that number.
As in previous contracts, the government will continue to subsidize the operators for trips made by students, senior citizens, and people with disabilities, as well as the trips made by those using the Macau Pass payment system.
Across both subsidies, the government plans to spend about MOP900 million, an amount that will then be subjected to a mid-contract review, to be adjusted according to the evaluation.