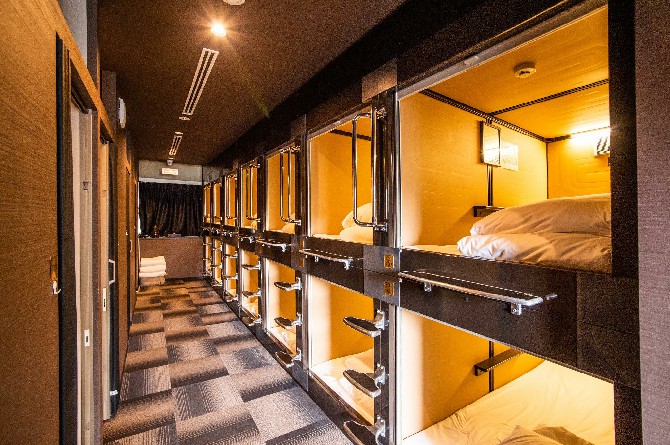 An example of the interior of a capsule hotel in Japan

The potential introduction into Macau of low- budget lodging facilities known as capsule or pod hotels is likely to promote some market balance in an industry that has relied on the high-end market for decades, a professor at the Macao Institute for Tourism Studies (IFTM) and director of IFTM’s Tourism Research Center, Leonardo Dioko, has told the Times.
“Considering that most of the accommodation development in Macau over the years has favored the higher end of the market spectrum, pod hotels may bring some degree of market balance to Macau, especially since bed-and-breakfasts, pensions, inns and two-starred accommodations have had a challenging time meeting ever-increasing standards of quality, comfort, safety, and service,” Dioko said.
“Depending on the value they deliver and the level of service, pods will probably be attractive to individual travelers familiar with and routinely visiting Macau,” he added.
For the scholar, Macau shares, to some extent, the conditions that led to the creation of these businesses some years ago in Japan.
“Capsule hotels were innovatively introduced in Japan and something that emerged out of environmental necessity: high land premiums, low availability of land for accommodation purposes and the restrictive initial cost of establishing full-service accommodation,” Dioko said.
He explained that if Macau combines those conditions with the increasing frequency of repeat travelers, the rise of low-cost fares and tolerance for tight spaces, as well as readiness to trade a high level of comfort for good value, “then you have the perfect conditions for a new category of accommodation, similar to that which gave rise to capsule hotels.”
For the tourism researcher, more than interfering with the business of the local high-end hotels, the inclusion of this new accommodation category in Macau, “might ‘squeeze’ existing players [in the hostels and inns business] unless they upgrade their game level by enhancing services and offerings, thereby protecting their traditional segments, which I reckon should start gravitating more to families.”
The licensing process and location will play a major role in the process of installing such facilities in Macau, according to Dioko.
“I am concerned more about licensing and location as I am not sure if the new law being contemplated would include zoning as a consideration. Depending on the size of pod projects and limits to approvals, their appearance in already congested parts of the city may raise new challenges or aggravate existing ones,” he said.
The rise of such lodging will also necessitate frequent inspections to ensure the quality of service and the maintenance of high standards of safety and hygiene, he noted. Dioko expressed hope that this would also be contemplated by the new Hotel Business Law.
The law, which is currently reaching its final stage of discussion at the Legislative Assembly, includes the possibility of the establishment in Macau of capsule or pod hotels as the director of the Macao Government Tourism Office (MGTO), Maria Helena de Senna Fernandes, has confirmed to the Times.
“In the current law [in force] we can’t have things like capsule hotels but in the new law, there is a way to handle that,” Senna Fernandes said, adding that the MGTO has been finding ways to overcome the difficulties presented to the industry due to laws that do not reflect the current situation and are not adjusted to the industry’s new developments.

What is a capsule hotel?

A capsule hotel is a type of hotel developed in Japan that features many small bed-sized rooms known as capsules.
A typical capsule includes a TV and Wi-Fi Internet access, as well as power sockets for mobile and laptop charging. Sheets, blankets, and pillows are also provided, and each capsule also comes fitted with a built-in light, alarm clock and radio unit.
Fitted with 1.2-meter-wide and 2-meter-long beds, pods are usually one meter high, being stacked on two levels like bunk beds.
Included in the rate is access to shared lavatory facilities and other common areas like entertainment rooms, internet kiosks, lounges or libraries.
Usually, they also provide vending machines and self-use laundry facilities. Some have cafés or restaurants on the premises.
In Japan, this type of lodging facility is usually found in the vicinity of major train stations in large cities such as Tokyo, Osaka, and Kyoto. The hotels target people looking for low-budget single-night stays.
Capsule hotels provide their guests with enclosed beds and basic amenities for prices equivalent to 200 to 300 patacas per night.
Although capsule hotels in Japan have traditionally targeted business people traveling alone, the latest reports show that some of these places are now going after other demographics. For instance, they have been offering different areas aimed at women or foreign travelers. Regarding the latter, some of the hotels have been increasingly offering English language websites and booking systems. RM