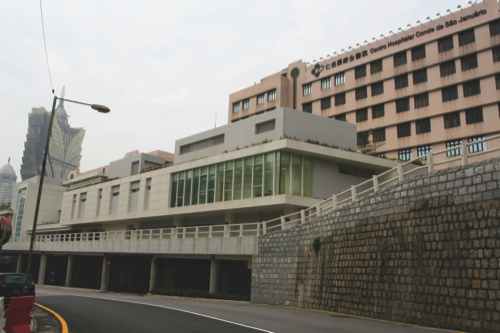 The Taiwanese gutter oil fiasco has hit a number of public institutions in Macau. The Health Bureau (SSM) revealed that three government departments, including Conde de São Januário General Hospital (CHCSJ), had bought food products from a local producer that used lard imported from the slated Chang Guann Company in Taiwan.
SSM director Lei Chin Ion broke the news during a joint press conference, comprising of his department and the Civic and Municipal Affairs Bureau (IACM) on Monday.
He said that CHCSJ started buying from Hang Fong Food Factory Ltd, one of the food producers on an IACM list of local businesses that used the problematic lard from Chang Guann around a year ago.
For two months, the company was supplying the public hospital with 30 kilograms of bread every day.
“After we verified [the information], we have decided today [September 8] to immediately stop using all foods [supplied by] this company. This is to ensure the protection (…) of medical staffs and patients”, the director said.
He added that CHCSJ is in the process of finding a safer and more reliable food supplier, but claimed that it was “a bit challenging”.
Lei Chin Ion also revealed that until August this year, Hang Fong has supplied a total of 726 kilograms of bread to the Institute for Tourism Studies and the Marine and Water Bureau.
SSM claimed that it has yet to receive any reports from patients, medical staff or residents about experiencing any adverse effects from consuming food products that were suspected to be made with Chang Guann lard. It has set up a hotline (2870 0800) for residents to enquire about the gutter oil issue.
The concern over the tainted oil scandal in Macau has led to concerns regarding the consumption of mooncakes. Some local bakeries have told TDM that sales of mooncakes have decreased by 10 percent due to the recent food safety incident. In fact, some locals have expressed their fear that the gutter oil may have been used during the production of mooncakes. Nevertheless, a representative of a local bakery claimed to TDM that their business had not been affected. JPL

The Taiwanese Ministry of Health and Welfare has published the test results of an investigation into the lard produced by Chang Guann Company, which showed that the food oil did meet the government’s standards. However, authorities still believe that the company has breached the law.
The refined lard produced by Chang Guann Company allegedly met all the hygiene requirements, except for those outlined in the heavy metals that is yet to be completed, according to Taiwan’ s public health authority.
However, since the process of refining recycled oil into lard employed by Chang Guann breached the law, all products made with the tarnished oil should be removed from the shelves, the public health watchdog said.
Chang Guann Company, a well-established cooking oil supplier in Taiwan, purchased the recycled oil to produce 782 tons of lard, with 645 tons sold to 971 food companies and restaurants including a number of leading brands. MDT/Agencies