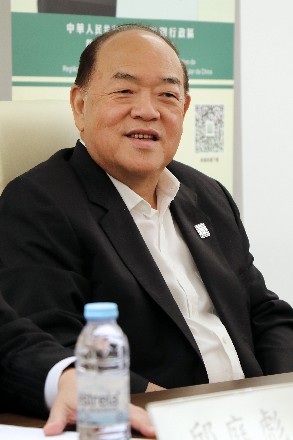 Chief Executive Ho Iat Seng said yesterday Macau will not be compelled to “act in a particular way just because Hong Kong has made its own National Security Law.”
Before leaving for Beijing to discuss economic revival strategies, the head of the government held a press conference at the airport where he was asked whether a revamp of the National Security Law in Macau was needed.
The promulgation of the National Security Law in Hong Kong has sparked discussions about whether Macau should follow suit and tighten its stipulations.
Ho stressed that Macau has already fulfilled its constitutional obligations by following Article 23 of the Basic Law, the de facto constitution of the city, to make a law that safeguards national security.
The local law was passed by Macau’s parliament, the Legislative Assembly, on February 25, 2009. A day later, the then-head of government, Edmund Ho, signed and ordered the publishing of the law in the Official Gazette.
After the law’s promulgation on March 3, 2009, no prosecutions related to the stipulations in the law have been pressed or processed by law enforcement entities.
The current head of government pointed out that although the law is in place, he agrees that there is room for improvement. However, he hinted that it will not be dealt with soon, as he stressed that further assessment of how the legislation should be improved is needed.
When asked if he could guarantee that what happened to Hong Kong’s Apple Daily would not happen in Macau, Ho said that he would not make the comparison.
In addition, he said he could not rule out the possibility of the police conducting inspections on media outlets with approval from a court of law. “As the Chief Executive, I can’t make guarantees on behalf of the judiciary,” Ho said.
He also stressed that the Macau government governs in accordance with the law. AL