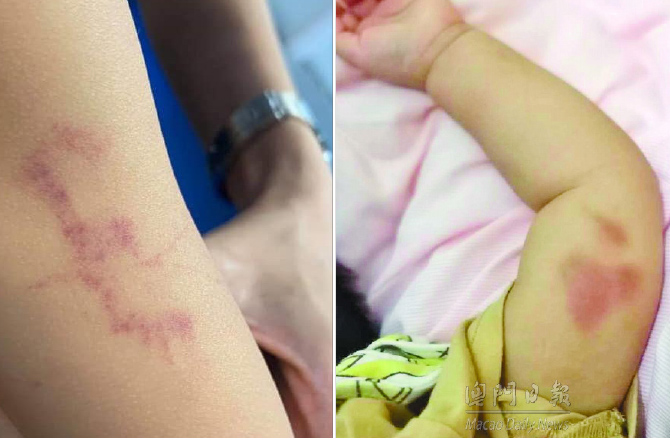 Reports of children being abused or mistreated at a local nursery went viral on social media over the weekend, prompting outrage and concern from netizens. The reports from parents and Macau media did not name the institution where the alleged abuse occurred.
In one social media posting, the writer expressed their dismay after saying they had found bruises on their child.
According to a Macao Daily News report, the first wounds were spotted on a Friday evening just two weeks after the child was enrolled. The mother spotted several bruises on the child’s arms. Both parents did not think of child abuse at the time and intended to clarify what had happened with the nursery the following week.
By next Monday, the parents had not discussed the injuries with the nursery. However, to their astonishment they spotted new injuries that evening.
The parents began to wonder what had transpired, as the marks were found on the inner arm. This made it seem unlikely that they were caused by accident or by other children.
The next day, the parents went to the police station to report the case. They were then brought to the public Conde São Januário Hospital for a check-up and escorted to the nursery by the police for an investigation.
Police asked to see the surveillance camera footage, which the father was allowed to see as well. Only then did the director of the nursery discover that there were other victims, whose parents had also checked the footage. It was later found that the first case took place as early as July.
In a second posting on social media, believed to be written by another mother whose child was allegedly abused in July, the author disclosed that her child did not want to return to the nursery to attend a graduation ceremony in August. The mother claimed that her child felt afraid of the nursery.
In July, the child started to show signs of emotional distress, however, the mother did not initially suspect child abuse was the cause.
The post described how the child, who was usually happy when his mother asked about his day, said that he was “not happy” that day. He told his mother that “the teacher [grabbed his] knees.” The teacher had also asked him to stand against the wall.
This mother revealed that some teachers had told her in confidence about the emotional control problems of a teaching assistant, who happened to have taught the child’s class.
The teachers could not publicize the incident because they might have their non-resident worker permits terminated, the parent claimed.
The father of the child said it is crucial to create a mechanism to assess the eligibility and reliability of nursery teaching staff.
The parents in both cases have filed complaints with the Social Welfare Bureau (IAS), but they say the authority is doing little to stop the situation from worsening.
In a statement sent to the media about the case, the IAS stressed that it has been closely monitoring the claims of alleged child abuse. It disclosed that once the bureau became aware of the case, it initiated contact with the victims’ parents and visited the nursery to obtain information about the children’s injuries.
The IAS also stressed that it could not make any further comment on the case, which is now undergoing judicial procedures. The IAS will punish the nursery pursuant to the Social Service Facility Licensing System if they are proven guilty in a court of law.