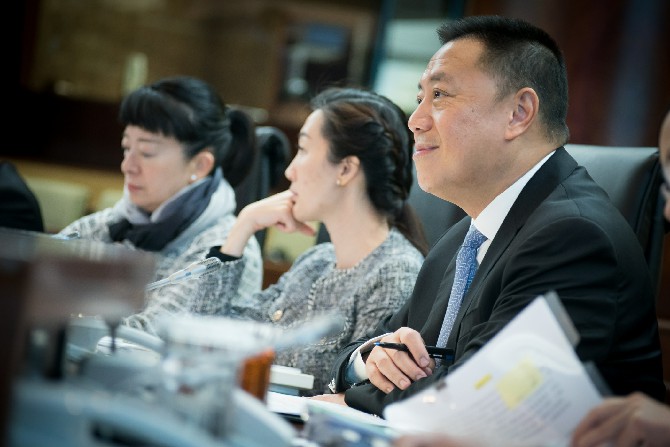 In this November 2018 file photo, former Secretary for Economy and Finance Lionel Leong attends a session at the Legislative Assembly alongside officials under his purview, including Irene Lau (left), who was appointed chairman of the Macao Trade and Investment Promotion Institute a month earlier

The Court of Second Instance (TSI) has ruled against former Secretary for Economy and Finance Lionel Leong’s decision not to accept the renewal of the residency permit of a man working as an engineer for Air Macau.
The case is related to an evaluation by the Macao Trade and Investment Promotion Institute (IPIM) of the man’s application for the renewal of his residency permit. In the past, the man had his request of residency under the technical immigration scheme approved.
In the ruling by the court, the TSI stated that the final decision from the Secretary on the non-renewal, “constitutes a violation of the principle of good faith,” which alone is “reason enough to void it.”
Although the decision from the TSI dates from last month, the case goes back to March 2019, when Leong’s office, disregarding the opinion of IPIM on the case, issued an order denying the renewal request for the engineer to be authorized to establish temporary residence in Macau.
As explained by the TSI, IPIM had given a favorable opinion but, when the case reached the final stage, the Office of the Secretary raised doubts about whether the requirement of residence in Macau had followed the law provisions.
In the note by Leong’s office, it was stated that Leong decided to reject the application because it was understood that the applicant did not fulfill the requirement of permanent residence in Macau since the applicant was residing in Zhuhai.
The Office noted that the applicant “travels to Macau exclusively to work but he is in Zhuhai where his home is located and his family lives.”
Stating that his residential address was not sufficient to claim that the man had no right to being approved for a local residency permit, the judges said, “since [habitual residence] is an indeterminate concept, in special circumstances, variations are allowed in terms of the standards normally followed to define the concept, since the interested party may be absent from Macau for various reasons.”
The TSI also noted that besides staying overnight in Zhuhai, in his record, the worker had over 183 days per year of presence in Macau. He also had presented a justification to live across the border for “family reasons,” in which he included the health condition of his elderly father, who suffers from various diseases, such as multiple sclerosis, diabetes and hypertension.
The court also noted that the applicant had proof that he has a steady job and is a taxpayer in Macau. He also has an underage son who, like the father, travels every day to Macau to attend school.
Last but not least, the TSI also noted that since the first application made back in 2011, the engineer had always stated in application documents that he lived in the neighboring city of Zhuhai. This fact had never caused any obstacle to his residency permit until March 2019.
“IPIM has never raised any issues on this matter.” This situation justifies “the expectation that was created in the applicant that not staying in Macau would not be an obstacle to the renewal of the temporary residence permit.”
The judges see no justification for the sudden change of criteria in the evaluation of the same case, which has occurred on several occasions, saying that such action “constitutes a violation of the principle of good faith, provided for in the Code of Administrative Procedure.”