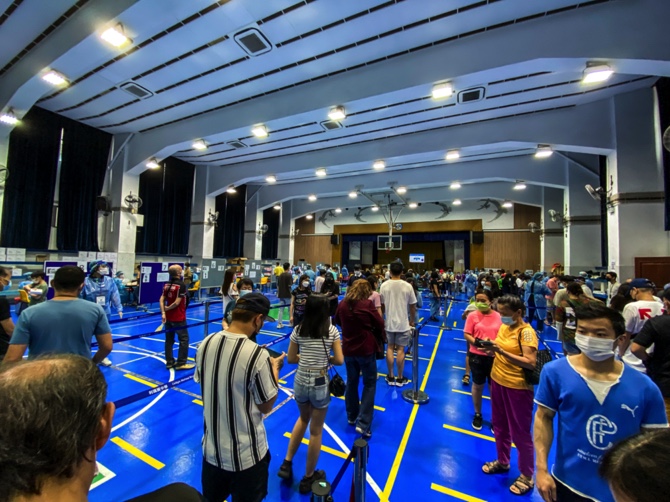 The number of Covid-19 infections in Macau has grown to 49, the director of the Health Bureau (SSM), Dr. Alvis Lo, informed yesterday during the now-daily press briefing by the Novel Coronavirus Response and Coordination Center.

The same health official said that the results of all samples collected during the citywide mass testing would become known today, once the results from all remaining samples are released.

Of the 49 positive cases, the large majority continue to be asymptomatic, with just 15 cases being reported as confirmed cases of Covid-19 (five more than Monday).

Lo also confirmed that all patients are in a stable condition and that there are no severe cases for the time being.

The health authorities have managed to link 47 of the 49 positive cases to the two interrelated clusters previously mentioned. The two remaining cases are currently under epidemiological investigation to determine whether they are also linked to those clusters.

“From the 49 positive results, 15 cases involve people with symptoms and 34 cases present no symptoms of the disease. All of these people, except two that we are still investigating, are linked to the two previous groups. At the moment, the first group (related to the group of non-resident workers) comprises 28 people, and the second group (related to the prison guard and his family) has a total of 19 links,” the director of SSM said.

Expressing his satisfaction with the way the citywide mass testing took place, Lo noted that, from the 677,586 samples collected over the 48-hour measure, some 564,297 had already been tested and yielded negative results.

21 groups of 10-in-1 samples have tested positive, with the health authorities still doing the necessary retesting to confirm which samples from these groups are infected.

“We have been able to have, till now, around 83% of all samples tested and we expect to have the results of the remaining ones tomorrow [today],” he said. He called on all people to stay home as much as possible and avoid all unnecessary activities outside their homes for the time being.

“Chief Executive (CE) has also already issued an order extending the closure of the public services valid throughout the rest of this week and we hope that all private companies that are not involved in essential services to the community will also suspend their activities to facilitate our work,” the official added.

The health authorities are also following up 2,142 people who are considered contacts or people with a similar itinerary to those infected to ensure that there is no significant spread in the community.