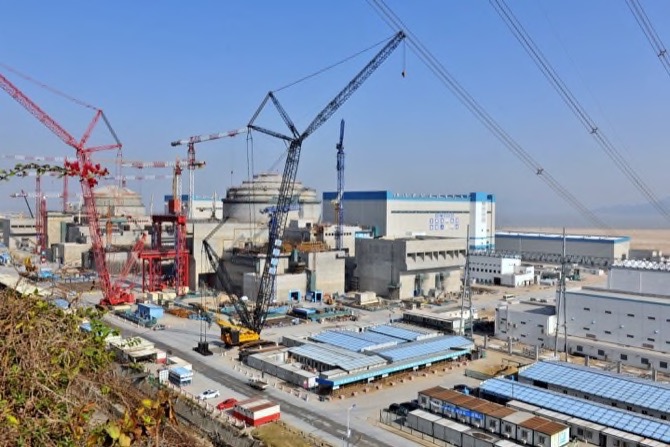 One of the key power generation system components of Unit 1 of Taishan nuclear power plant cracked during an earlier pre-production test, according to a report by FactWire News Agency.

“A ‘boiler’ in Unit 1 appeared to have cracked during functional testing and must be replaced, according to a nuclear plant employee,” the FactWire News Agency report reads.

“He also told FactWire undercover reporters when they visited the site last month that representatives from Harbin Electric, the Chinese manufacturer of the ‘boiler’, came to the plant for a week in late October to discuss with the plant operator, Taishan Nuclear Power Joint Venture, a plan to replace the faulty ‘boiler’,” according to FactWire.

Taishan Nuclear Power plant is being made by the joint venture between the China General Nuclear Power Corporation (CGN), which is a China state-owned company, and the French electricity company Électricité de France.

CGN, in a reply to Fact Wire News Agency, said “the Unit 1 of of Taishan nuclear power plant has already completed the cold functional and thermal functional tests. The test results were in line with design requirements. The deaerator is a common equipment of a conventional island thermal system, […] it does not belong to the nuclear safety related system.”

“China General Nuclear Power Corporation (CGN), the developer of the Taishan nuclear project, said on Tuesday afternoon that there were ‘partial defects’ in the welding of the deaerator in question, but insisted ‘replacement work was near completion’,” FactWire News Agency writes.

CGN’s official document says that the deaerator of Taishan Unit 1 is 46.6 meters long and 4.76 meters in diameter.

Safety concerns were raised last year after components of the nuclear plant were discovered to have been made in mainland China, not in France as previously thought.

According to FactWire, China had been hoping to launch Unit 1 this year, whereas French engineers who were sent to Taishan for the project, told FactWire that it could only be launched in 2018 at the earliest.

“The National Nuclear Safety Administration of China stipulates that a nuclear plant must seek permission from the agency before loading fuel assemblies to conduct tests. But public records show that Taishan Unit 1 has yet to have received such a permit,” FactWire reported.

Last year, members of the civil society had asked the MSAR government to clarify both issues related to the emergency plan and possible risks posed by the nuclear plant to Macau’s population. A local delegation visited the nuclear plant to check the safety of the infrastructure.

The head of the Security Forces Coordination Office, Choi Lai Hang, led the local delegation and explained that Macau would not require protective measures, even in the event of a very serious nuclear incident (level 7) at the Taishan nuclear power plant.