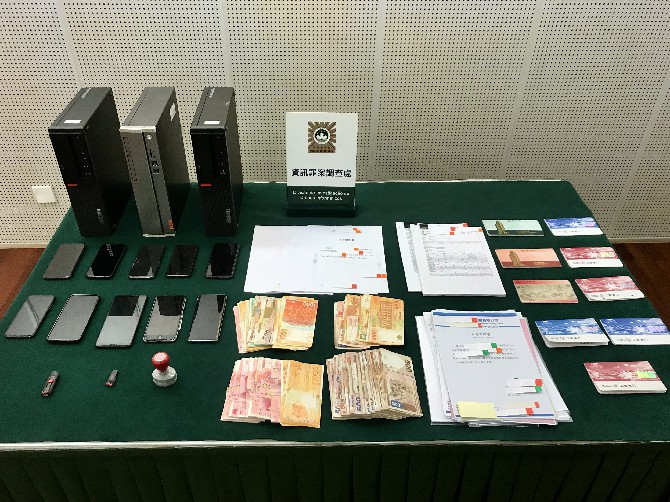 Nine local men have been detained by the Judiciary Police (PJ) on suspicion of being involved in a scheme that took out bank loans justified by the false acquisition of automobiles, the PJ spokesperson revealed yesterday during a special press conference.
Among the nine suspects detained, four are the alleged scheme operators, including the ringleader. Five are considered participants. All of them have now been accused of document forgery and aggravated fraud.
The PJ received a complaint from the banking institution which claimed on August 19 to have found, during the evaluation of loan applications, that a car dealer located in the ZAPE area had presented several applications for their clients to request bank loans to buy cars.
In the analysis, the bank found that in many of the applications were missing documents and others raised suspicions of being forged. According to the PJ, among those documents were salary declarations, bank account statements, and even employment declarations.
The bank decided to present a formal complaint to the PJ after the applicants failed to present the original copies of the documents submitted to the credit institution.
On the line were bank loan applications that amounted to HKD2.25 million, including two cases that had already been approved in early June, granting the applicants the combined amount of HKD900,000.
The bank also stated it had conducted an internal investigation which revealed that the car dealership’s owner was the brother of the deputy director of the bank branch that granted the loan applications. The bank suspects that the deputy director made use of his position to accelerate the approval processes and bypass the delivery of the necessary documents for the loans to be approved.
According to information obtained during the PJ’s investigation, the scheme originated with the owner of a real estate agency and two of his staff members. The PJ suspects the owner to be the scheme’s ringleader.
Since 2016, the agency has allegedly advertised through private networks that they could provide loans to people who had difficulty obtaining them by normal means.
Searching the agency, the PJ officers found documentary evidence in three computers as well as over HKD100,000 in cash.
The PJ spokesperson also said that there was sufficient evidence in the agency to prove that they had been operating such a scheme since 2016. They collected personal data from several people interested in participating in the scheme to forge documents that would then be submitted by the car dealer to his brother at the bank.
According to the information collected, the scheme participants charged a commission of HKD160,000 from the two applicants whose loans were approved.
Upon questioning the car dealership owner, the PJ also found that after the loans were approved, the cars allegedly involved in the application were quickly sold to other people, who were not aware of the scheme, for a cheaper price.
Although the PJ has arrested the nine men in connection to the case for now, the force said the investigation is still ongoing since it is believed that more people could be involved in the case.
The PJ also said that besides cars, they suspect that the same people have conducted a similar scheme involving housing units and much higher loan amounts.
While the PJ continues the investigation, the nine suspects, with ages ranging from 27 to 38 years old, were presented yesterday to the Public Prosecutions Office.