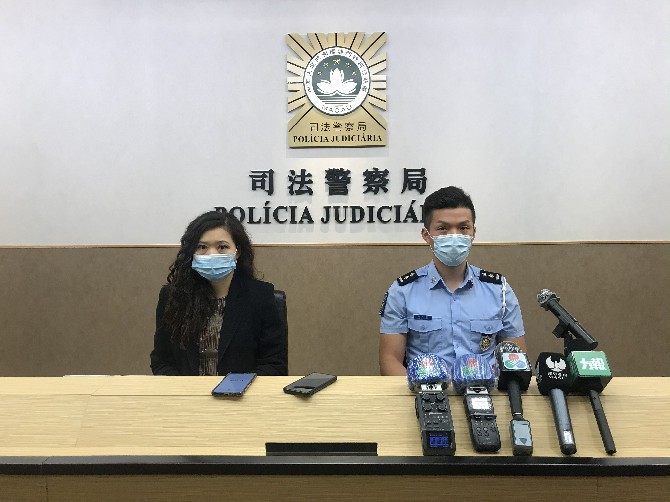 The Judiciary Police (PJ) has reported five fraud cases in which victims lost money after being connected to people without a confirmed identity.
During yesterday’s joint police press conference, the PJ reported the five cases involving five local residents, including an underage middle-school student.
The five cases shared one characteristic in common: the victims all were in contact with an online ‘catfish’, a person pretending to be someone they are not.
In the first case, the victim is a Macau man in his 20s. An individual contacted the man through a chat app claiming to be able to help the man with a virtual currency investment. The unidentified suspect persuaded the victim to open an account on another app and deposit 1,680 patacas into it. The victim subsequently made two bank transfers through two different banks into two different mainland bank accounts of 8,320 yuan and 41,680 yuan, following instructions from the suspect. The ‘catfish’ then cut contact with him.
In the second case, the victim is a casino employee in his 40s. The victim started communicating with an unknown person who later persuaded him to move the conversation to another app and to disclose his password and the username on the platform.
During this period, the victim received several phone calls from different friends who reported that they had made several online e-money transfers to an account being used by the suspect at that time. They did this because the unidentified suspect told these people that the man was in need of money. The victim lost 1,000 yuan from his e-payment and his friends reported a combined loss of between 1,700 yuan and 2,000 yuan.
The third victim is a medical professional from a public hospital in his 40s. His fraudster, who claimed to be a woman, agreed to provide sexual services to him for 800 patacas. The payment was requested to be made in the form of game points. The victim spent 799 patacas buying 3,000 game points and sent the game card information to the catfish.
Afterwards, he received a phone call from a man requesting 8,000 patacas as a deposit for the sex service who stated that the payment should also be made with game points. The victim only bought 2,000 points worth 533 patacas, despite the suspect’s requests for more money.
The fourth victim is a middle-school student. He watched a TikTok video and joined a related group chat. One individual from the chat requested a private conversation with the boy. During the private talk, the person sent a QR code to the boy and said that the code was for him to scan to give gifts to the TikTok user, claiming that the gifts would not cost anything. The boy used his father’s phone to scan the QR code several times, causing his father to lose over 54,000 yuan in the process.
In the last fraud case, the victim is a local woman in her 60s. Her ‘catfish’ claimed to be an American soldier stationed in Iraq who said he had mailed a package to the woman in Macau but it was intercepted in Turkey. To get it, he said the victim must pay HKD56,000. The woman transferred the money to a Hong Kong bank account. On August 29, she reported the case to the police authority.