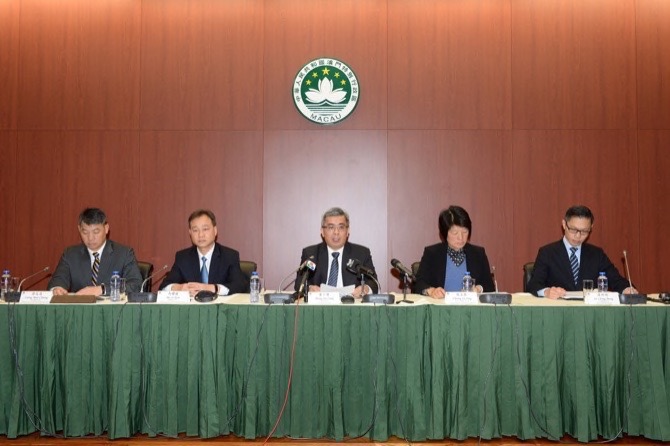 “At the same time, the adjustment of the gaming sector has not brought consequences related to Macau’s security situation,” he added.

During the conference, Wong reported some of Macau’s crime statistics in 2017. The Macau police force filed a total of 14,293 criminal cases, 94 fewer than 2016. Some 820 violent crime cases were registered, a drop of 2.4 percent from last year due to fewer unlawful detentions (7.5 percent down) and drug trafficking cases (15.4 percent down).

When asked about the number of people who were denied entry to Macau, Wong replied, “normally, we do not publish these statistics. This is a usual practice worldwide.”

According to Wong, Macau will deny entry to individuals who pose a threat to Macau’s security or internal stability.

“Both types of entry ban are in accordance with the internal security law and other relevant laws,” explained Wong.

The security authorities received 716 submissions regarding the cybersecurity law during a previous public consultation period.

“We are carrying out an analysis. After it is concluded, we will make public the related opinions to the society. […] Hopefully, we can finish the related law in the first half of this year. Afterwards, we will try to promote legislative work during the second half,” said Wong.

Some 1,847 gaming-related crime cases were recorded, four fewer than in 2016, while 448 usury cases were also reported.

“Most of the suspects and victims were not Macau residents,” revealed Wong.

Four mainland residents died during unlawful detention in Macau, either by committing suicide or falling from buildings while trying to escape.

In 2017, five WeChat-related gaming crimes were registered. In these cases, criminal groups used the social media platform WeChat to live-broadcast gambling activities in Macau or the Philippines, with gamblers paying to join via WeChat Pay.