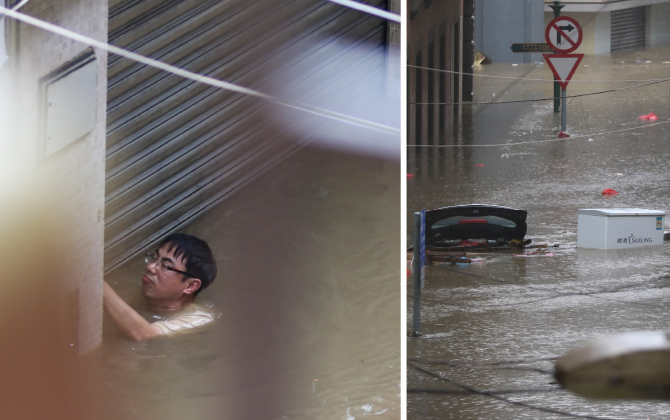 As rescue operations continue after the passage of super-typhoon Hato, the number of casualties continues to rise. Authorities have confirmed yesterday (Thursday) another three deaths, which increases the previously announced death toll from five to eight. Today (Friday), another fatality was confirmed by the government bringing the death toll to at least nine.

The three new deaths, caused by drowning, were discovered during the ongoing search and rescue operations in parking lots of four residential buildings and in several private business establishments, the Civil Protection Operations Center (COPC) informed.

The official noted that the previous day, the flooded streets and parking lots made it very difficult to attend some of the calls for help. As such, it was impossible for the rescue works to be performed faster.
In such situations, he noted that the COPC relies on the Customs Service (SA) to send teams of divers to perform underwater searches to find bodies of missing persons suspected to have drowned. A total of five bodies were uncovered this way.

According to the latest update, the Health Bureau’s (SSM) director Lei Chin Ion said that none of the 200 injured victims presented life-threatening conditions, although there were two cases considered worrying as one victim presented a bone fracture and another a bleeding eye.
Lei added that most of the injuries were caused by glass cuts and falling objects.

According to the Civil Protection authorities, as of yesterday evening, a total of 432 incidents related to Typhoon Hato were registered, with the majority of them resulting from falling trees and objects from buildings. The COPC also registered a total of nine cases related to the partial fall of scaffolding structures.

Up until 11:30 a.m., traffic conditioners were used in several streets to facilitate cleaning and repair operations and the securing of structures, which also led to the temporary opening of the Governador Nobre de Carvalho Bridge to private vehicles.

According to information provided by TurboJet and Cotai Water Jet, ferry services between Macau (Outer Harbor and Taipa Ferry Terminal, respectively) and Hong Kong (Sheung Wan and Kowloon) were resumed in the early hours of yesterday with some limitations.

As for connections to and from the HK International Airport (HKIA), Turbojet was still suspended, while Cotai Water Jet (HKIA-Taipa) resumed at 10:15 a.m.

Ferry connections from both companies between Macau and the mainland are still suspended.

In a press conference on Wednesday evening, the director of the Macau Meteorological and Geophysical Bureau (SMG) Fong Soi Kun said that Typhoon Hato was “a special typhoon to Macau. The strongest one ever (since we started to have records),” with wind speeds exceeding 200 Km/h and an average wind speed recorded by several weather stations of around 140 Km/h.

Another typhoon may approach Sunday

Some weather applications and storm monitoring services are showing that another typhoon might start forming in the South China Sea on Saturday night.

The typhoon, which is still technically a “tropical depression” and is likely to be considerably smaller and weaker than Typhoon Hato, is currently projected to sweep into the Macau-Hong Kong area, and either make landfall or subside in the Pearl River estuary. 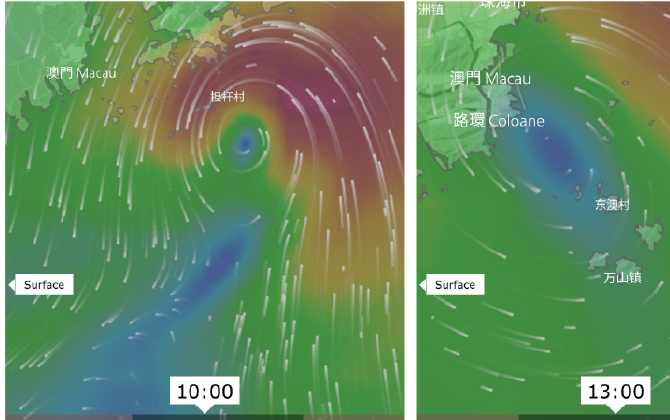 By 10 a.m., the typhoon is projected to be south of Hong Kong SAR, drifting along a westward trajectory. At 1 p.m., the eye of the tycoon might be just kilometers southeast of Coloane.

The eye is a region of mostly calm weather at the center of strong tropical cyclones. Strong winds may still be felt on the Macau peninsula and also in Hong Kong.

The website of Macau’s Meteorological and Geophysical Bureau contained no warnings of a tropical depression as of last night. Hong Kong’s Observatory shows the path of the Tropical Depression means it is likely to pass by the city on Sunday morning. DB