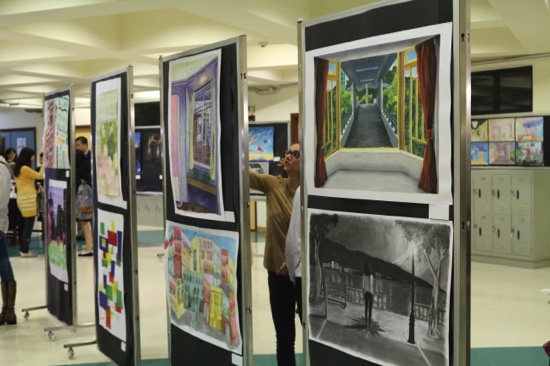 An art exhibition was held at the Macau Anglican College (MAC) last week to showcase the coursework of some 40 art students across forms four, five and six. Some of these students will shortly submit their work for grading and monitoring at the University of Cambridge, in the U.K.
For many of the students, the exhibition on Thursday night was a chance to display the fruits of many months of work and preparation, ahead of the examinations for the subject that then took place over the weekend.
Paul Bishop, the head of the Art Department at MAC, explained that few guidelines are given for the art project aside from a general theme for each year group, except form six..
“Form four students have been given the theme, ‘Object as a Metaphor,’ while form five has been assigned ‘Sense of Place,’” Bishop explained to the Times, “which involves coming to terms with some sort of location.”
Form five student, Sin Ian Si Tou, motioning toward her painting said, “You can see [in the painting] my room where I have lived for about 10 years. [The theme] is a ‘Sense of Place’ so it has to have some emotional attachment. Since I have looked out of that window for years […] it has a lot of significance to me.”
Her classmate Melody has also painted a picture of her room. “It’s what I see at the beginning of the day and at the end of the day. The sky above is what I want to reach, though it’s quite small and quite far.”
Sin says that she likes art but “it’s not like other subjects as you have to put in a lot of extra time,” while Melody jokingly adds, “Yeah, there is no real syllabus.”
Paul Bishop, who is now in his second year at MAC, said that form six has “more freedom,” in its coursework as there is no  assigned theme.
Most of the artwork exhibited on Thursday were paintings, though some are drawings and others include elements of collage.
MAC art teacher, Bernita Schröder stressed during the evening the importance of holding an exhibition to showcase the students’ work. “It’s very important for the students to see their teachers, friends and parents celebrate their art.”
Her colleague, Robert Smerdon who is in his first year teaching at the school, echoed Schröder’s statement, adding that it is especially the case for art “as it can tend to be a very solitary subject.” Daniel Beitler