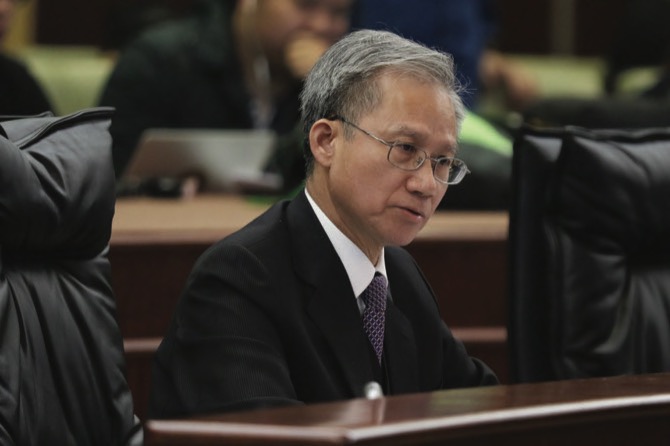 President of the Third Standing Committee of the Legislative Assembly, Vong Hin Fai

Passed on its first reading at the Legislative Assembly (AL) almost 18 months ago, the Law of Employment Agency Activity seems to have reached  a deadlock since.

This was admitted by the president of the Third Standing Committee, lawmaker and lawyer Vong Hin Fai, at a press conference held after yesterday’s meeting, at which the law continued to be discussed.

To the media, Vong, without mentioning the word “deadlock,” admitted that the committee has been addressing successive versions of the law submitted by the government for over one year.

None of the previous versions have managed to convince the committee, which has been criticizing several loopholes, mistakes, inaccuracies, and inconsistencies with this law and its relation to others in force in the region.

According to the president of the committee, at the meeting yesterday, the changes introduced to the text arising from the second version were discussed. Such changes were presented to the committee in February and have been incorporated into the current third version.

Vong noted that the government had this time presented a version that aims to address the incompatibilities of duties between employment agency staff and company ownership with the regime of the civil servants or public officials, noting that “the government proposed to introduce some limitations for civil servants and public officials so they could not be partners or administrators of these companies.”

“The committee warned the government that there is [already] a legal regime that establishes the duties to be exercised in exclusivity,” said Vong. “Also, there are other laws in the region that do not limit the access of civil servants and public officials to be part of other companies such as gaming-related companies.”

The committee recommended, once again, that the government amend the proposed law to take into account “the other existing laws and incompatibility of regimes.” Vong said the suggestion had been accepted by the government side and should result in the elimination of such restrictions.

The lawmaker said he expected the government will present a fourth version of the law at the next meeting of this standing committee.

COMMITTEE THINKS IT BEST TO WAIT

Although the discussion regarding the fundamentals of this law seems to have halted after the first reading approval, and while many of the backbone topics of the law are still subject to discussion by the standing committee, Vong noted that before the meeting had even started yesterday, the members had questioned the government regarding the need to postpone or delay the relevant discussion.

As the president of the committee explained, this has to do with the four bills that are to be discussed and voted on during a plenary session adjourned for tomorrow afternoon, including the amendments to the Labor Law, the law for hiring non-resident workers, the minimum wage bill, and the law of employment policy and labor rights, which according to Vong, “have some relation with this law.”

He and the Committee believe it better to wait for the outcomes of tomorrow’s Legislative Assembly discussion.

Questioned by the Times as to whether, in the discussion of the law, the committee and the government had come to a final decision on the topic of the payment of fees to employment agencies, Vong said, “we have not discussed that topic today. But we have approached the topic in previous meetings and [the law] includes a fees regime.”

Asked who should be responsible for paying the fees – employer or employee – Vong said, “in principle, it should be the employer [that] settles those expenses, but the law also says that the [agents] can receive fees from the employees.”

Committee will hear from non-resident associations

The President of the Third Standing Committee of the Legislative Assembly, Vong Hin Fai, has said that yesterday’s discussion did not cover the joint petition submitted by six non-resident associations during an earlier meeting of the Standing Committee.

The petition, which was submitted in the first week of June, expressed a number of concerns about the law proposal under discussion. Vong had pledged then to meet with the six associations and hear their concerns in detail.

However, Vong said yesterday that they have not been able to track down the association representatives since the petition was submitted last month.

“We have received the petitions and we will treat them accordingly,” he said. “[It is the] understanding of the committee members that we should hear what these people have to say on the topic, but first, we need to verify if these people are really interested and if they are representing [legally-registered] organizations in Macau and if they are really doing some work here.”

According to Vong, the committee has not yet heard such representatives due to the fact that “the Public Relations Office of the AL is still trying to identify the people and to ascertain the legal status of the organizations.”