THE ESSENCE OF HEALTH 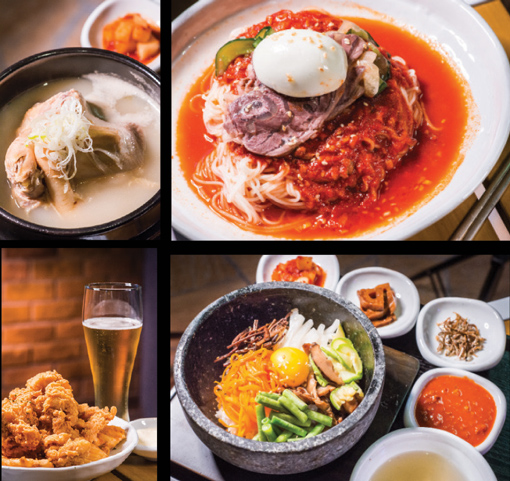 Any of you who are into anti-aging and plastic surgery will know that the Koreans are really crazy about looking good. From the latest technologies in facelifts to miracle creams, they have the reputation of being ahead of the game when it comes to investing in research and development to keep individuals young and healthy.
Koreans believe in an old saying, “Daily food is the best medicine”. “Samgyetang”, or ginseng chicken soup, is one distinctive example among all healthy Korean cuisines. Recently, “Hongjiade Korean Ginseng Chicken Soup” restaurant opened in SOHO, City of Dreams. “Hongjiade” means “plenty” in Korean. As the one and only Korean eatery in SOHO, Hongjiade Korean Ginseng Chicken Soup advocates a healthy diet and balanced lifestyle by offering authentic Korean cuisine with a selection of healthy ingredients imported from Korea.
A nutritious and natural ingredient, ginseng is known to improve strength and help the immune system, according to two important ancient documents, China’s “Compendium of Materia Medica” and Korea’s “Dong-oui-bo- gam.” Similar to the Chinese, Koreans also have their own way of making the ginseng chicken soup, traditionally serving it in the summer since its nutrients replenish the loss of stamina from excessive sweating and physical exertion, while it is also perfect in the winter for reducing heat loss.
A wonderful ginseng chicken soup is made of spring chicken stuffed with ginseng, glutinous rice, jujubes, chestnuts, and gingko cooked in chicken stock. Being an expert in “Samgyetang”, Hongjiade’s authenticity and choice of ingredients lead to perfection. Ginsengs is organically grown and handpicked in Chongnam Geumsan, the best ginseng-growing area in South Korea. To preserve the maximum amount of nutrients, the chicken is stewed for 48 hours with its bones and legs, which contain heaps of collagen. The soup is grease-free, fresh with the sweet fragrance of herbal medicine. The soft and tender spring chicken can be easily enjoyed, while the glutinous rice absorbs the flavor of chicken stock and ginseng, a nourishing ingredient filled with essence.
Hongjiade serves 4 styles of ginseng chicken soups with different merits and flavors: “Hongjiade Ginseng Chicken Soup”, “Red Ginseng Chicken Soup”, “Black Chicken Soup” and “Abalone Ginseng Chicken Soup”. “Red Ginseng Chicken Soup” is the most nutritious and precious among the four, as it is made of ginseng that has been steamed and dehydrated. Its nutrition is enriched and condensed. Not only is it deeper in color, but it is also a well-known fact that Red Ginseng’s medical values are much higher than normal ginseng’s.
“Black Chicken Soup” is considered as a “power booster”. Rich in high quality protein, black chicken helps to diminish free radicals. Moreover, the rice in the soup contains more minerals, such as zinc and manganese, than normal grained rice does. This black soup can help to restore vital stamina and strengthen the organs. Meanwhile, “Abalone Ginseng Chicken Soup” stewed with spring chicken and ginseng is delicious and extremely nourishing, as abalone invigorates vital energy, enhancing stamina, and undergoing metabolism for both men and women.