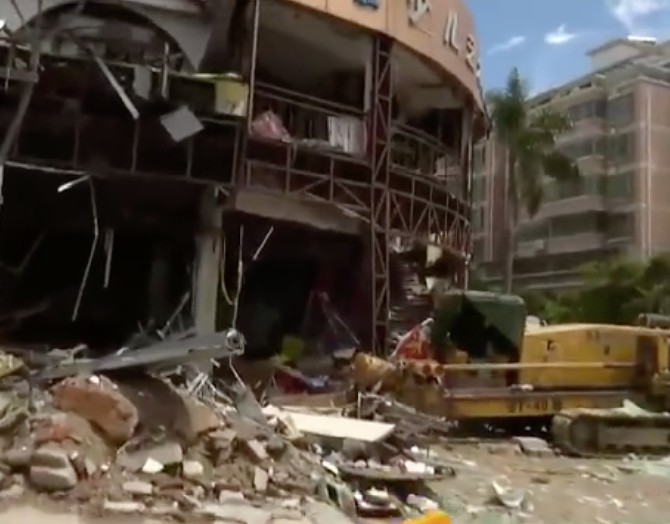 A large explosion at a Zhuhai hotel on Friday injured three bystanders, according to official reports from the mainland press.
At about 9 a.m. on Friday, a group of explosions occurred near and at Zhuhai OYO Teng Hu Grand Hotel, which is located in the Bai Teng Tou area of Doumen district.
It took six fire squads, 19 fire trucks and 55 firefighters one hour to put out the fire, which covered 150 square meters.
Firefighters rescued nine people, three of whom were spectators who were standing nearby observing the fire and the first few explosions. Two sustained mild injuries while one sustained burns.
According to a report by the People’s Daily, a preliminary inspection indicated that an exploding LPG bottle caused the disaster. The official account is that the disaster was caused by human accident, according to mainland media reports.
Some of the bystanders who were interviewed reported hearing four explosions on Friday morning.
Video footage also shows that multiple explosions occurred. Several video clips spread on Weibo showed that crowds were witnessing the aftermath of earlier explosions when suddenly another one detonated, causing bystanders to flee.
The blasts heavily impacted the ground and first floors of two buildings. The first floor of one of the buildings is mostly comprised of businesses, including a children’s art center.
Judging from the video footage, one fire broke out on the ground floor of a residential building which accommodates 10 residential units overlooking the scene of the accident. Other fires were observed on the hotel’s ground and first floors. JZ